So the saga continues. My kid can't make the toilet in time to not get just a little #2 in the underwear. He gets so preoccupied with the computer or puzzles that it's too late. It is a big deal, and this needs to end, but holy shit, the school acts like Armageddon has begun. So for the past month, I've been signing incident reports about these accidents. They use the same form for broken bones and communicable disease transmission and cursing out the fucking teachers. They are basically covering their asses as they prevent him from participating in the swimming lessons offered by the city. What I'm really trying to say is that it's been a pleasure lately. But in the end, this kid can work a computer and put together a 200-piece puzzle in 30 minutes, so Rain Man can surely make it on time to shit in the toilet.

I really tried to resist, but on the way out I told the teacher in front of my son that he's working on solving the problem, that I don't blame them for keeping him out of the swim lessons because he's not fully potty trained, but that he'd let them know how the swim classes are going that he's taking in the evenings. Watch out public pool!

Tonight I am drinking Dixie, a beer that's been neglected in my house for months. This beer is brewed by Joseph Huber Brewing Company in Monroe, Wisconsin for Dixie Brewing Company in New Orleans, Louisiana. Dixie was destroyed by that bitch Katrina, and I guess it's taking some time to get back up and running. The website they promote on the label is DIXIEBEER.COM which doesn't work and I can't find any website for the brewer either. Anyway, use big brother Google if you're interested--Dixie has been around for over one hundred years!

Twist-off cap. Lemony citrus aroma with plenty of corn and grain there as well. Grainy, kinda sweet flavors, as well, mostly corn. But that sweetness has just a hint of honey in there, too. Very plain, yet still flavorful. A little sweet for my liking. Medium-thin body, decent carbonation. Super-easy drinker. Definitely a second-tier beer but overall I could drink these all day, and the 4.5% alcohol would allow for that, too. Between Katrina and their website, these guys seem to need a break, so buy a six-pack and drink it at the pool one afternoon!

To Win and Die in Dixie: The Birth of the Modern Golf Swing and the Mysterious Death of Its Creator 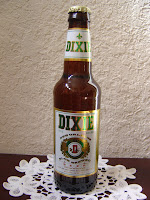