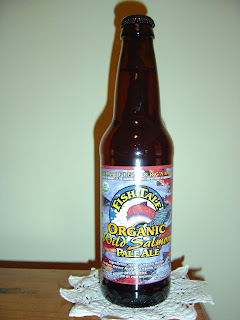 Wow. What a day! Sent over a guest review to my friend Laurie at 100beers30days. We're going to swap reviews in the near future. Then I came home to find out that my friend's business trip (with planned beer stop) was successful. There are two small pictures below that may or may not clue you in. Don't bother clicking them as they came from a phone and unless you work for the FBI, the bigger ones wont be any more helpful. It'll be a surprise you can look forward to!

Fruity aroma, not overly powerful but nice tropical mango with a little peach and orange, too. Starts sweet and tastes like tea with a little orange accent in there. Two lumps with a crumpet are included with plenty of bread flavors. I slapped myself when I thought I heard the Queen talking with Evander Holyfield! Spicy black pepper adds a little nip at your palate later on. This beer was a little under-carbonated and there was a small drying factor toward the end that was slightly annoying. A little boring but decent. They sell it at Publix now, too. Try it if you want. I'd surely buy something else though.