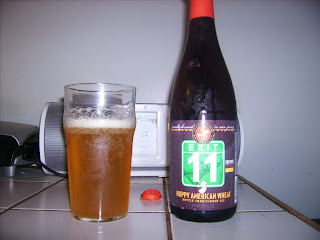 A few days ago I put out an open invitation for a new guest review. Twitter friend Jim Furiosi stepped up to the plate and produced this gem. I don't know Jim that well, but I do know that he seems to be a really nice guy and is knowledgeable when it comes to beer. Oh, he does have one flaw that I know about, which is being a Yankees fan. I know, a Yankees fan in PA? That's exactly what I was thinking. Seems he and his family are cat people, too. You decide about that, but read his post below first and tell him what you think!

A few weeks ago, our beloved cat Charlie passed away. Our six year old demanded a replacement cat so we went to the local pet chain store where the animal rescue people give cats up for adoption. I had to pick up a CD for my mother nearby so I missed the first part of the interrogation process. The leader of the cat protective society asked me if I knew the dangers of having a cat outdoors. So true to my upstate NY hick roots, I chimed "possoms, skunks, bobcats, bears, dogs, coyotes, etc." She chimed in "cougars" (I thought WTF?). She asked me if I was aware of feline leukemia. I said yes (did not mention past cat afflicted by it). She also talked about cat AIDs. I thought the $75 included getting fixed. Do these cats inject themselves with catnip with dirty needles?

Needless to say, we were told indoor only or no cat to adopt. We were also shown a release where they call the vet and find out if the shots are up to date of our other pets. I would have had better luck at a Romanian orphanage. I explained that our two cats were outdoors 100% before we adopted them. I have to say life is full of risks. Cats love to hunt and play outdoors. Charlie cat walked past a bear once and didn't care.

On that line I have New Jersey's Flying Fish Exit 11 right in front of me. Exit 11 off the Garden State Parkway is for the town of Woodbridge. Take too many risks and there is what was formerly called Rahway Prison! Exit 11's risks are being a "Hoppy American Wheat Ale." egads an IPA and wheat beer combined? ;) Aroma yields a nice mix of sweet banana and citrus tones. Beer has some wheat grass and lemony flavors with an almost lavender-like envelope and a crispy medium-dry palatte surrounding it. The 6.2% abv can be felt tingling on the tongue. As far as the bitter elements, I think I would prefer cascade hops or centennials. The mix of Columbus, Palisade, and Amarillo hops add some nice bitterness but most of the hoppiness is in the finish instead of up front. A pleasant beer to drink nonetheless.

Jim included this picture, too. I'm pretty sure that Flying Fish doesn't brew this Charlie beer, though. Perhaps it is a home brew named for their beloved cat. Or just a picture that reminds his family of him. I asked, but am too lazy to wait for the answer. Update 30 minutes later: Confirmed, Charlie was Jim's last home brew and a stout. 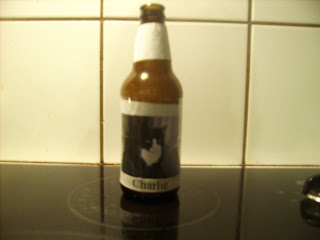