Ah, May is here. Here's a simple update. Both of my kids have birthdays this month. Only one month until my favorite part of living in Florida--hurricane season. It's super hot and humid outside today, so I'm praying that I don't need to go back out again.

Back to work tomorrow. I offered someone a job on Friday, so let's hope she accepts. No matter what happens with that, I am pretty sure I'll continue my role as the Anne Sullivan of the office. I'll let you use your imagination as to why. Finally, I will leave you with a quote, one The Cooking Asshole lifted (from this person) a few days ago, "Quotes are for people who can't think for themselves.

Since I agree, and am unilingual, here's one in French, which comes from my high school teacher. I have no idea who said it, if anyone. "Au pays des aveugles, le borgne est roi!" Look it up if you care.

This morning (damn, two in a row) I'm drinking Iniquity Imperial Black Ale brewed by Southern Tier Brewing Company in Lakewood, New York. As usual there is a story. This times it's about the hexagram talisman being used for magic and also as a symbol of brewing. This beer is "THE ANTITHESIS OF UNEARTHLY" which refers to their other beer, named Unearthly. The name Iniquity opposes goodness; Southern Tier chose the name because they don't seem to care if people think it's immoral to blacken an ale, producing a beer contrary to normal IPA expectations. The bottle is brown, but looks black with the beer in it, and the white and purple accents look pretty cool. Drink at 42 degrees F.

Hoppy, citrus aroma with plenty of orange peel. Floral with some light caramel and dark fruits, too. Well, they were right. Not what I'd expect from an IPA, to start at least. Rich dark chocolate and caramel flavors, very malty with some roasted and burnt accents too. But then, wow. All of that maltiness is washed away in a flash by powerful bittering grapefruit, spicy black pepper and some burn from the 9% alcohol. My palate is clean as a whistle; time for another sip. After a little bit, some smokey characteristics start playing around with some pine trees. Don't worry, there isn't a forest fire! Medium-upper level body; solid prickly carbonation, chewy. The aftertaste is bitter and flavorful, very pleasant. Iniquity is a nice and refreshing beer. As malty as the first sips started, by the end of Big 22, it's very bitter. I like that this beer was not some boring clone and that it was a bit all over the place. Even now, all gone, I feel like I am breathing out pure alcohol. Let's see what happens in an hour. Check it out!

The Men Who Stare at Goats ~ George Clooney Video on Demand 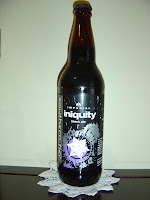