Preparing myself mentally for the Flyers second round series game one versus the Bruins starting in about 45 minutes. Believe it or not, these guys need me to be watching to pull out the win! It's true! I have avoided all of the pre-series hype because I don't want to be reminded of the absolute choke the Flyers had against these guys in the Winter Classic at Fenway Park. Not only did the Flyers grab defeat from the jaws of victory that day, but it cost me a bet with fellow beer blogger LostInTheBeerAisle. Luckily, he's not a nasty guy! Right now, though, I am just hoping that today's game sets the mood for the series. A 5-0 total romp ass-kicking would do just that and keep my blood pressure down, too. You see the picture here is in black and white? That's about to change, people!

This, gulp, morning I am drinking Maximus IPA brewed by Lagunitas Brewing Company in Petaluma, California. I reviewed this beer about a year ago, but this was one of the beers I mentioned picking up again for another look. I won't repeat all of the same things I did there about the bottle decoration. They are the same, including the long ramblings you'll find around the edge of the label. "Life is Uncertain. Don't Sip."

Beautiful aroma. Tropical fruity, floral with some malt behind that. Lots of pine flavors start things out, pretty bitter. But pancake syrup and candy flavors sweeten things up permanently shortly afterward. Some lemon peel, earth and grass are also contributing flavors. Spicy black pepper is persistent. Toward the end there is a little bite from the 7.5% alcohol which appears in concert with some slight medicinal flavors. Creamy carbonation, sticky body. A little too sugary sweet, and those off flavors toward the end were not positive either. But overall, this is a very nice beer. 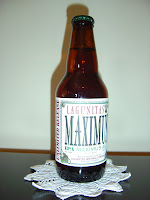