Say Uncle! Say Uncle! Yes, two times. My brother and his wife had their second child this morning. Not twins, though, as I became an Uncle the first time a few years back. But does that make this any less exciting? Hell, no! That's another kid I get to play with, tease, then send home. And both of my boys are older than both of my nephews. So if I ever get out of, and this is reality this instant, end-of-the-world-birds-flying-animals-fleeing-pitch-black-afternoon-lightning-I-know-it's-gonna-fucking-rain-like-hell-flash-flood-danger Florida, maybe I'll get to be the Jerk Uncle! Sweet.

Tonight I'm drinking Oak Aged Unearthly Imperial India Pale Ale brewed by Southern Tier Brewing Company in Lakewood, New York. I had the regular Unearthly a little over a month ago and thought it was pretty good. The label is electric green with an acorn cap on top of a hop, disguising it. The reddish-brown, silver and white accents make the bottle stand out. And the pricing label placed there by Total Wine which covered half of the story on the back was also spectacular, after I scratched it off! "AN UNINHIBITED INFUSION OF HOPS & OAK!" Serve at 42 degrees F.

Plenty of oak on the nose, hoppy with booze and sweet caramel. Sweet, rich caramel starts out the flavors, and you know what? That caramel is soaked in fruit-laden booze. Yep! Very malty with some noticeable bittering hops. Oh, and OAK! Not bitter or sweet, very well balanced in that manner. Candy apple and cotton candy all rolled into one, but made the adult way, with some prankster adding a jigger or ten of spirits. Pure poetry, right? Spicy, and yes the 11% alcohol is noticeable from nose hair to stomach. Thick and syrupy, too. In a nutshell (get it? loser!), this is Unearthly: but it has oak, which I thought was annoying; it lost the nice fruitiness that the regular version showed; and the alcoholicness is more pronounced. Basically, you should drink Unearthly without the adjectives unless you have some serious oak and/or booze fetish!

Guess What? I don't have a photo, at least one I can find. And bottom line, I'm too lazy to get you one now. So too bad, so sad, love dad! I think I did a decent job describing the label above, and the colors over on the regular Unearthly post will give you an idea!

Update 5/20/2010: One of my Twitter friends felt sorry for me this afternoon and said I could use his photograph here. Be sure to visit Mikey on Twitter and at his blog as well. People, this is what real photography looks like. None of that nonsense you usually see here! 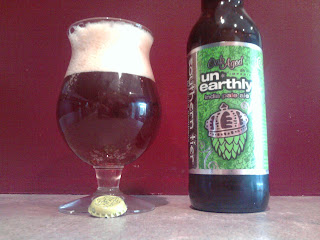 that's funny. my own alcoholicness is also much more pronounced.

Hi there. Yes, there is a market for this beer: drunken squirrels. Of course, I exaggerate! LOL.

As much as I liked the original I liked this one even more. I didn't think the oak was overboard. I thought it was just enough to give it something extra special. It's definitely in my top five favorite DIPAs, maybe even top 3.

You might not believe me, but I was thinking you might say exactly that as I was drinking this beer last night. For real!

I really love the oak-aged Unearthly... nearly as much as I love their Gemini (Unearthly and Hoppe together). So good.

I really like Gemini, a lot more than Unearthly straight up. And you know what? I guess I'm just not an Oak kind of guy. Such is life.