Today is a Philly sports kind of day! Before I get too far, let me say I love the Sixers, but I love beer sixers more, and Pro Basketball is boring! Sorry. Did they win the title this year yet?

The Phillies are trying desperately to lose the first game of their double-header to the Rockies. Jason Werth just fumbled the ball out in Right Field something fierce, but the game is still tied. Roy Halladay had a decent Game 1, and I expect him to do even better in Game 2 after an hour or two of rest. He's a machine! Later on the Flyers will try to even their series with the Bruins at three apiece. I use "try" with some assumed irony. Better be on TV or I'm going to need to hit up PhillyKelly and her Live Tweeting play-by-play again. Sucks to live in Florida, and this is another reason.

On the way home, I stopped by our community "Club House", which is basically the banquet/gym/office house that is next to the community pool. My motive was to find out the status of the "Police Tape and Barricade" on the pool. As you'll recall, I was a little pissed off on Mother's Day to find this situation. What I didn't tell you is that on Monday I already chewed the Property Manager on-site a new one, as much is allowable in front of your two kids. She promised to communicate what's going on in a mass email yesterday. Didn't happen. I let it go one extra day.

Still closed! She got a mega-earful tonight. What about the communication you promised? It wasn't approved by The Board. Fuck that! I told her I'd be back every day for an update. Please, God. Let me be an asshole, yet still remain civil! Anyway, I'm ready to go out on the second line tonight!

Tonight I'm drinking Raven's Eye Imperial Stout brewed by Eel River Brewing Company in Scotia, California. I hadn't seen this guy until a week or so ago over at Total Wine. This beer is certified organic by CCOF. There is an imposing, angry-looking raven on the label. Guess I better watch my back!

Chocolate, dark cherry, cola aroma. Rich milk chocolate flavors start things out, with a hint of roasted malts to the side. The 9.5% alcohol wastes no time introducing itself with a big kick in the face. So far, that's an exaggeration. Dark fruits, more of that cola, a hint of coffee, and some persistent background licorice add to the flavor profile. Syrup flavors without the syrup thickness, too. The dark fruit and booze combination is really intense and harsh! Lots of pretty nice flavors that I wish were integrated together a little more. I will say that a knock at the door and a few domestic chores made the last 6 ounces sit and warm up a bit, which led to a slightly smoother beer. Perhaps if you dare test the raven, you'll let it sit outside the fridge for 20 minutes before beginning. For me, one glass and not 22 ounces would have been just dandy! 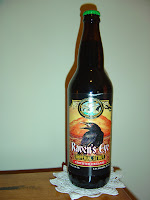