I've had a handful of people approach me about beer trading. I've never done it, ever. I have been the recipient of some packaged items from a couple of friends as presents. And one or two breweries indulged me many moons ago. But I've never been on the sending end. Probably because the beer laws piss me off that I need to sneak around and that breweries can't just sell me their shit directly. I have to pay to package and ship it too? Ugh. But I do like a challenge!

One of my online friends lives in Portland, just some asshole that said he'd send me whatever I want anytime. He told me that like four months ago, and I finally responded. Another reason I've been reluctant to trade is because I don't have any bargaining power. However, I decided that Cigar City and Saint Somewhere along with a Raging Bitch and a Weyerbacher beer were going where they rarely see the light of day. I'll let you know how it goes down. If well, perhaps I try it again every now and then.

Tonight I'm drinking Ruben & The Jets brewed by Lagunitas Brewing Company in Petaluma, California. Hold up. Let me pour the rest of this so I can read this crazy label without spilling any. OK, thanks. Around the edge of part of the label is a quote by Ruben Sano. "If the People would just hear my Plea I would do Anything just to sing the songs that was turning me on in High School." This beer is brewed in honor of the 40th anniversary release of this album. Obviously broadcast in (((STEREO))) too.

Continuing on, the label says the art and some other stuff are being used with the permission of the Zappa Family Trust. Someone told me when I bought this that the Zappas made these guys stop brewing this beer, at least under this name, so I'll try to find something out about that, but since this ain't journalism, I'll go with a "rumor now, facts later" approach! The Lagunitas dog is saying "Arf!" in one corner and the other corner says "BoppaDooAyDoo STYLE ALE". Finally, The picture depicts some mostly big-nosed, animal-like musicians rocking out!

Chocolate aroma with raisins and other dark fruits. VERY rich chocolate flavors, EXTREMELY sweet. In the background you will probably taste more of the raisins and dark fruits along with just a touch of roasted coffee and vanilla. Thick molasses consistency and flavors jump back in and take control. As sweet as this beer is, it's even smoother, so silky and creamy. On the back end there is a hint of wood and the 8.6% alcohol does a little warming job. Light flat carbonation. If you didn't get that this was thick, then let me tell you it's also syrupy. Not quite done Big 22. Dragging with the sweetness. The flavors last and last and last! I don't know that you'll find this beer, at least not with this name, but if you do and have a sweet tooth, check it out! Actually, the seemingly abandoned, no-customer Crown Liquors I bought this at had a few more if you are really interested. Call me.

Update 5/21/2010, yes the same damn day, and yes, I realize I am able to research better the first time! Here is the link that talks about the Zappa and Lagunitas divorce provided to me by friend Mark. It's funny, HaHa type stuff, that I had the info all along!

Cruising with Ruben & the Jets ~ The Mothers of Invention 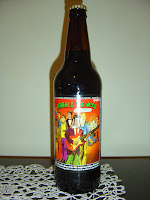