Super-excited about new employee starting Monday, which also means super busy. But three year old's school called around 1 pm. No, he didn't shit himself into a pick-up. He's actually feeling sick, didn't eat or drink anything, napped three hours, was cold (in Florida), and the reason I knew he was sick--he actually shit in the toilet without incident! But he's resting in front of the tube now, seemingly OK.

But in the hour I've been home, seven year old has been inside several times from playing. I questioned why a few seconds ago, and when he stalled with an "I'm thirsty" bullshit answer, I knew something was up. Yep, neighbor mother, same as from a few weeks ago, and damn this chick went from invisible to mom-of-the-year, was on her way over to tell me her son and mine had cigarettes on the corner. WHAT THE FUCK!!!!! My son ran away as I was getting the story from her, but I basically just threw away the key to Rapunzel's (not his real name) room for the rest of the night. I told him if I find he's using his computer or any modern convenience besides a light bulb, I'd take it permanently. Plus a lot of yelling!

Enough. The Flyers start soon and I gotta publish this bitch! By the way, thanks so much for reading. Please comment or sign up to receive daily emails or a feed of comment in the right column! And never forget, I love you!

This evening I am starting with Saison Rue, a Belgian-Style Ale brewed by The Bruery in Placentia, California. This beer was brewed with rye and Brettanomyces. According to the label, it will "evolve over time" so if I want a hoppier beer I should drink it fresh, but if I want a more rustic beer I can cellar it for up to two years. I guess I'm closer to fresh since I've had my bottle only since the end of January of this year. The presentation is elegant as usual, with bright orange lettering over a burgundy background. Serve at 50 degrees F.

The top came off with a giant POP! Again, I am not normally a "pour" commenter, but this has a gigantic, bubbly, frothy, white head, so it's worth noting. Hoppy and fruity apple rolled in to one whiff, a little bit sour. You will probably notice the smell of wet dog, too. Seriously! You start with a big carbonated fruity explosion in your mouth, mostly lemon and very sour apple. That sourness never goes away. There is some of that "funk" that "they" keep talking about; I don't particularly like that description, could just be me. It is distinct, however; so let's call it the dirty janitor's mop and wet sneakers taste. Of course, my opinions are my own. Funny thing is that as disgusting as that imagery is, the taste is not. Takes a little getting used to, and I'm working on that, but it's interesting and distinct. Finally, the big spicy and carbonated flavors are a little harsh. I don't dig this but you know, it was pretty decent despite my review! Try the Saison de Lente instead, or at least first, if you can!

If You Love Someone Who Smokes,Get Them To Watch This Video 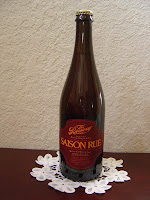