Got back from lunch today, typed in my password and boom! Some fake "we're saving you" virus was attacking my computer and the settings. After two hours with the geek squad, I was back in business. The timing sucked, too, as my new computer is finally in transit from HP. That is another story all its own--you'd think that HP might like to sell computers but don't be too sure.

Tonight I'm drinking Wacko brewed by Magic Hat Brewing Company in South Burlington, Vermont. This is their summer seasonal, and the label says "A beer with beet juice color". Great! Cool art work with a beet and vines, colorful as well. Drink by the end of July, 2010. Under the cap it says "Karma cannot be Denied".

Indeed it is a reddish-orange color. The aroma  is grainy and dirty, almost like a garden. Light sweetness and fruit to start, then some bitterness balance, then absolute terrible blech! Toasted dirty band-aid and dry horribleness. I have nothing else to say except this sucked and I dumped it before hitting the halfway mark. It is that bad! Give me the New Grist beer again before another one of these--that was Heavenly glorious in comparison!

This Is It (Single-Disc Edition) ~ Michael Jackson 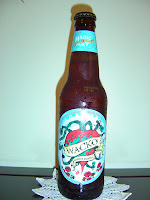 Yep I agree it is not very good, I am avoiding the bottle I saved to review like the plague

ITS REALLY THAT BAD!

You need a guest blogger for that one. Tell them you have the bottle and you'll give it to them. Make sure it's not a real friend. :))

is it weird I still want to try beers people hate? I'm almost even more intrigued after that scathing review.

Start with this one and the other I mentioned there: New Grist. Both are pretty inexpensive and will satisfy your desire for self-punishment.