The beer scene around South Florida has been pretty drab lately. Not even a stinking new summer brew on the shelves. I've tried to bide my time reviewing some notorious beers, and I swear to God that I bought a 4-pack of Busch Light Pounders this afternoon for an upcoming one. I'm pretty sure I'm destined to review every Macro out there by the end of the year.

I tried to think of ideas. Apparently my one about drinking a beer from each of the World Cup teams' home country was already thought of, and in the end, I agreed with the conclusion that it would be difficult to find beers from the African nations and a few of the other countries, too. I mean, do you really think Kim Jong Il is gonna send Total Wine a beer? Not unless it's strapped to a Nuke. Fucker!

Tonight I'm drinking 1888 Bock brewed by Jacob Leinenkugel Brewing Company in Chippewa Falls or Milwaukee, Wisconsin. This brewery is "The Pride of Chippewa Falls, Wisconsin Since 1867". Not sure what the 1888 in the name belongs to. Too lazy to find out, too, but I'm betting Google would help you figure it out for me!

Malty aroma with a little nuttiness. Malty caramel flavors, too. Very! A dash of spice and a sprinkle of bitter and you are pretty much done. Oh, except for this berry-like flavor that provides a faint tart touch right at the end. High carbonation is a little harsh. Pretty one-dimensional. OK. 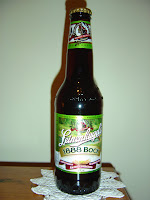 I drank about 6 Leinie wheats at a concert we went to a few months ago, because that was my only decent option. It wasn't bad -- but I wouldn't go out of my way. One of these days I'll have to send you a Dreadnaught.

Yeah, I've had their wheat. Not a bad option.