It was crazy dark and lightning bolt-ish this morning. All the radio pundits, even the innocent Lite ones, were doing their best to make it seem like the weather was an accessory to the new Twilight vampire werewolf whatever the hell that shit is about movie that got released or will be released soon. I just don't know or care. The closest I ever got to that movie/TV/not-sure series was at a party, and a 20-something girl had on a T-shirt with one of the vampires on it. She was kinda cute, so after mocking the shirt for a few minutes, I asked to take a picture of it. You know, stretched down to get a good boob (I mean vampire) profile! I have the picture on my cell phone, which unfortunately is just a phone with no internet hook-up. I haven't caved yet!

Tonight I'm repeating a beer I first reviewed last September. You may say that September isn't summer, but if you lived where I do, you'd be wrong! Yes, I'm drinking Anchor Summer Beer Brewed by Anchor Brewing Company in San Francisco, California. The bottle as usual has the cool shape. The label says this beer is an all-malt wheat beer.

Lemon, wheat, a little floral aroma. Nice citrus burst right in the beginning. Mmmm. There is a wheaty twang or zing or one of those Batman words, with even a light sourness present. A hint of bread pops in and out, too. The upper-level carbonation is excellent and the beer has a bit of wheat texture. Very refreshing, and I liked it a lot. Simple and flavorful. The finish is clean, yet still wheaty. Check it out. It should be readily available where you live (unless you live in Fantasy Land, like, well, hmmm, haven't you been reading? I name at least one per week from there.)

Twilight Edward Juniors T-Shirt (This might be the one described above, not absolutely sure) 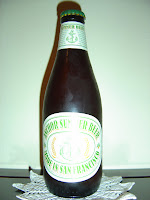 "That's a pretty crappy picture, dude!" Yeah, I know. Thanks for saying so and noticing and actually getting to the bottom of the review. If you would buy me a camera and some lessons (or read me the manual), I think I could do better. Thanks as always for reading!
Posted by Beer Drinker Rob at 7:36 PM

If you have photo messaging capability on your phone you can send the picture like you normally would except instead of sending to a contact, send it to your email address.

It works. I want to see that pic.

Let me see what I can do.

While the story is true and the picture does exist, I'm not sure I would publish it even if I could.

Don't use your flash... Turn on lots of lights in your house, and don't use your flash. You should get better beer photos. <3 Love the review, though... Maybe I should wear a twilight shirt when I want dudes to stare at my chest.

Yeah, when I don't use flash, like outside, things come out well. I've been pretty happy with some of my outdoor pictures. I have tried no flash and a lot of light inside and things still seem dark. I'll try more practice.

The Twilight shirt thing might work. Or any other strange shirt. Or maybe just something low cut. LOL.