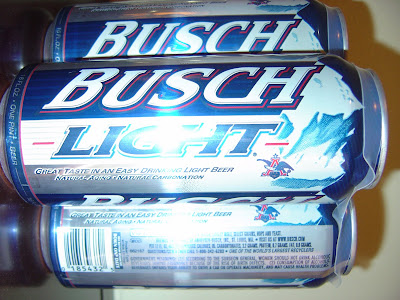 Tonight the only thing cold in the fridge are (were) two 16-ounce pounder cans of Busch Light brewed by Anheuser-Busch in St. Louis, Missouri. Yeah, I know this is the second Budweiser beer in a week, and thank you for being a loyal-enough reader to notice that. I used to drink these pounders in bottles in the mid 90's after college with my two of my housemates. We were the nightmares on Elm Street in Peekskill, New York, and these were the cheapest available--$10.99 + tax + NY Bottle Deposit for a case of 24!

I've complained about the lack of choice lately and was just about to go on strike! That was until rock star Ed Roberts texted me tonight that his Total Wine store got the only case in all of South Florida of one particular Cigar City beer. And, get this, that he'd be at my Total Wine to drop it off this afternoon (he was in a class/meeting with like 100 other nerds. LOL.) Now that is kick-ass! Did I want one??? Of course I said yes! And you know what? I picked up 4 other new beers while I was there, so it was a good experience all-around.

I was going to go for Macro Mondays for these reviews to be cool, but then I remembered the majority of you word whizzes don't get alliteration. Anyway, this can describes this beer as having "Great taste in an easy drinking light beer" and identifies the brewery as "One of the world's largest recyclers". This beer was born on 23MAR10. Nutritional analysis per 12 oz: 95 calories; 3.2g carbohydrates; 0.7g protein; 0.0g fat. Feel free to call them at 800-342-6283 as well with any questions or comments.

OK. I cleaned the top of the can with my shirt so we should be good to go. No aroma. Well, you know something is in front of you so it can't be nothing. Perhaps a little sweet grain. Flavors are also pretty much nothing. There is some faint corn syrup in the background. It's a little less watery (and less refreshing) than Select 55 but other than that they are basically the same, though you get more calories from this guy. Perhaps that is a bonus for you skinny readers. Other than the big, aggressive, biting carbonation, this is super boring. Light, sweet, bland, carbonated water. Easy drinker and I put away two in about 10 minutes. Whatever. 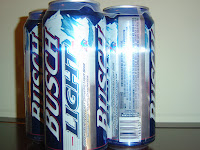 I know some of you have come to appreciate the beer can crush pictures, and I almost took these empties outside to stomp them flat, but then I decided it wasn't worth the time!
Posted by Beer Drinker Rob at 6:39 PM

Ahhh Busch Light. The first beer I think I ever had in college. Still go back to it from time to time. You can't beat the price when you're looking for quantity over quality.

Yeah, this one was pretty nothing bland boring. I'm pretty sure I remember Publix sign saying 3.91 cents per ounce for this one. I should just get a keg!

I was partial to Keystone Light myself. The cans were supposedly lined with some kind of shit that made them taste colder. Or something.

Here's a geek story about the Keystone can lining. I used to be a nerd.

You can't even imagine my surprise upon opening my email feed from you this morning. Busch Light. Gracious :)

Haha. Feeling a little uninspired lately. Plus I'm not too good to review this beer. Joking around about it is fun too. Didn't you see my bottled water review from a week or so ago? LOL.

How on EARTH did I miss that? I sure wish I hadn't!