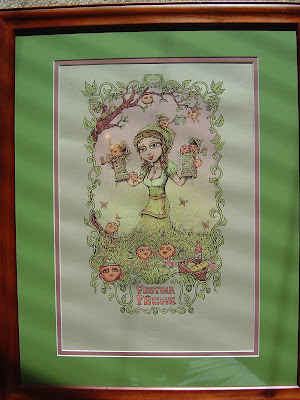 This morning I was pleasantly surprised to find the men's finals of the French Open on the tube. The normal dreadful Sunday-morning TV was replaced with a rematch of last year's final where Robin Soderling shocked the almost unbeatable Rafael Nadal. Today's match was fairly competitive, though Nadal was clearly the dominant player, and in the end, it only took three sets for him to avenge last year's defeat. Congratulations! Watching the match was also a solid part of my Flyers pre-game mental preparation for game 5 tonight. GO FLYERS! There's also an NBA Finals game on tonight, in case you thought I was not paying attention, but I don't give a shit about Pro basketball.

This afternoon I'm drinking Festina Pêche, a malt beverage brewed with peach concentrate by Dogfish Head Craft Brewery in Milton, Delaware. I initially reviewed this beer last July, to a less than positive conclusion. However, since winning the Marq Spusta Festina Peche print and hearing a bunch of friends say how much they like the beer, I decided to have another go at it. I suggested to my wife that she could frame it for me for Father's Day, and she told me fine, but that it would be for my office. Can you believe that shit? She doesn't like it? I believe her exact words were "What the hell is that?" The label design has simple peach trees and says "Festina Pêche is a neo-Berliner style Weisse fermented with peach juice. This unique, tart and refreshing brew is so down with the dog days of summer."

Peach soda aroma with carbonation bubbles that keep exploding in my nose, just like a soda would. Peach and lemon flavors kick things off, very tart, acidic and sour! There is a definite sour candy aspect to this beer. Good carbonation, crisp and refreshing. Peachy sweetness does take a little of the sour edge off of the beer, yet it does retain most of its tartness. Definitely a fruit beer, but a good example. A little watered down and thin, but I liked it. So I guess I've evolved into a semi-fan! 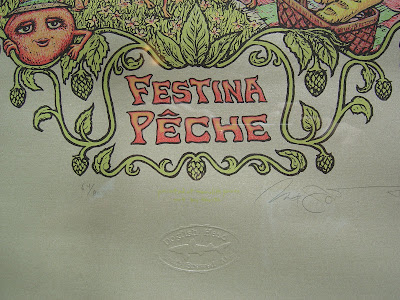 Update 9/22/2010: I took out a picture of Rafael Nadal and put in the Marq Spusta print as well as adding the Dogfish Head Stamp above. 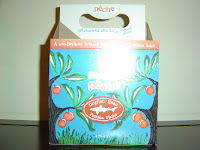 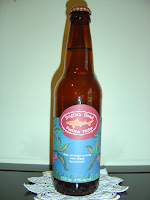 Bottle and packaging.
Posted by Beer Drinker Rob at 4:51 PM

Hey! I bought this on my binge! I will let you know how I like it once I get around to it.

Yeah, that's what I figured, bunny. When you get around to it. BTW, did you see my review of Publix Spring Water today too? http://tinyurl.com/278lrhz Yes, seriously.

I drank this Sunday night. Did. not. like. Of course, I had just eaten a very sweet fresh peach, so maybe that was part of the problem.

Hi Bunny. The real peach could have been your problem. I thought it was pretty good this time around.