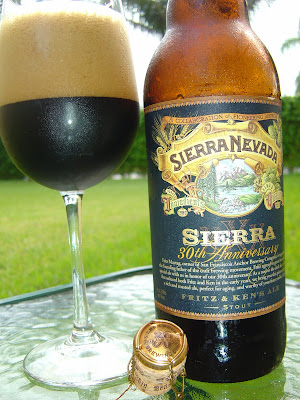 This evening I'm drinking Fritz & Ken's 30th Anniversary Ale, a stout brewed by Sierra Nevada Brewing Company in Chico, California. I've been holding on to this bottle for a while and actually have another to save for another time. This beer was guest brewed by Fritz Maytag, the owner (at least he was) of the awesome Anchor Brewing Company. Fritz and Sierra Nevada's Ken Grossman brewed this in honor of Sierra Nevada's 30th Anniversary. The wine-sized bottle is beautiful, very classy presentation. I hope the beer is as nice!

Awesome head, a fluffy giant! The beer looks like motor oil. But the smell is different with chocolate and molasses, not too sweet. Rich milk chocolate flavors start things off. Period. The end. No, just joking, but they do persist throughout the entire experience. There are plenty of nuances to this beer, yet it still seems rather straightforward. Licorice and vanilla are both players here; I really adore both of those in this type of beer.

Creamy smooth lusciousness! Yes, I said it! There is a light burnt bitterness and some hoppiness that keep a relatively sweet start in check, and are very welcome. Nice warmth from the 9.2% alcohol, and that also really makes some of the other flavors stand out too. Picture vanilla and licorice twisting and turning with the alcohol! A little spice toward the end is also an interesting part of the story. This was a great beer and I'd recommend it if you get the opportunity! 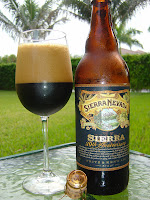 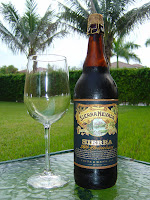 Corked before; popped after! Good head!
Posted by Beer Drinker Rob at 10:07 PM

Nice review. I was pleasantly surprised how much I liked this beer too. It will be interesting to see how this baby ages.
Cheers
mike

I was expecting a lot more harsh burnt bitterness, and was happy not to find it. Talk to you later.

I also have one aging...not sure how long it will last in my house though!

Just picked up the new 30th Anniversary one; Charlie, Fred & Ken's Bock, which is an Imperial Helles Lager. Can't wait to crack it open! :)

Interesting, I tried the F&K on draft several weeks ago and it was super, super smokey. Overwhelming! I shouldn't have had a whole pint - I think a taste would have been enough for me.

I'm the only one in my house I need to worry about drinking any beer. LOL.

I haven't seen the new one in my Total Wine yet.

I didn't taste any smoke in my glass. I would definitely have remembered that as I don't particularly like that aspect in a beer.

I know you're way south, but BX has it in stock; haven't been to Total this week :)