World Cup Soccer started yesterday. Wow, people are fanatics, and that is exacerbated by the fact that they only do this tournament once every four years. My Brazilian, Colombian and Venezuelan co-workers geeked out our conference room computer, projection TV, and X-Box system for the maximum not-working experience. Terrific! Today I'm betting on a few 1-1 ties or some other exciting matches. US plays England soon. U.S.A.! U.S.A.!

This afternoon I'm drinking Hop Sun Summer Wheat Beer brewed by Southern Tier Brewing Company in Lakewood, New York. The label is pretty simple, with a bright yellow sunburst over a nice blue contrast. None of their 12 ounce beer labels even approach the creative coolness of their Big 22's. That's fine, just an observation.

Sweet, fruity peach and orange aroma. The flavors, however, are not as sweet as you were teased into believing. That's actually a good thing! You will first notice plenty of orange and lemon citrus, accompanied by a decent dose of hops, giving a tiny zing. That's pretty much the entire flavor profile. There is zero wheat to be found, which I don't really care, but thought it was worth a mention. Very drinkable and refreshing, a little watery but pretty good flavors all-around. The carbonation was a nice medium helper. One dimensional yet not too boring or bland. I guess it's exactly what's advertised--a refreshing summer beer! Try it! 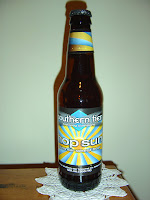