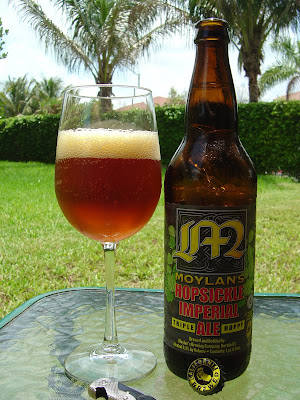 Somehow I managed to avoid the water park birthday party today. I complained that I needed to mow the lawn, fix cabinet that was ripped off the hinges, see why the ice maker was not making ice, and run a half-dozen errands, besides not "wanting" to go. So after getting gas, doing the grocery shopping, putting all the crap away, making lunch, cleaning up, feeding my kids, and only then starting my task list, well, I'm busy! Now for the reward!

This afternoon I'm drinking Hopsickle Imperial Ale brewed by Moylan's Brewing Company in Novato, California. The label is busy, but grabs your attention with bright yellow and red writing on a shiny gray background. First, you will notice "TRIPLE HOPPY" suggesting this goes beyond your normal Imperial IPA. Next, a handful of awards are listed, but I did notice most are from 3 or 4 years ago. There is a giant red banner that says "LIVE ALE! - KEEP REFRIGERATED" right above a map to their brewery and the owner's email. Yeah, Brendan Moylan wants to hear from you; I was going to put the email here, but half a dozen of their staff are listed on the website, too, so I'll feel less guilty if you go from there. Finally, Brendan's little intro to the beer ends with "Pucker Up!" You'll remember me trying that a few weeks ago. After you read the review below, you'll probably be able to guess which was more puckery! If not, then ask me, (Stupid!).

Tangerine and pine with a tropical and candy punch, plus bread. That's what I thought about the smell! Very nice. Totally different flavors though, and I might curse here out of necessity. Massive fucking black pepper and hoppy, spicy flavors up front. Very harsh and aggressive bitterness. Lemon and orange citrus zest with caramel are also present in a thick, resinous and oily beer so far. This beer is not balanced and quite like some kind of hop-heroin or hop-crack, really. Spicy and alcohol will warm you up and burn you down, too, though the 9.2% alcohol is disguised well over all 22 ounces. Somewhere, yes in this beer, there is a hint of honey, but it's like that family secret no one is allowed to discuss.

Well, I liked this beer, but I'm pretty sure that I learned something today. Despite my love for hoppy, bitter beers, I like my hop bombs with a bit more sweet balance than Hopsickle was willing to offer. This bitterness left behind on my palate is going to ruin my lunch, dinner and probably a few meals tomorrow. Forget Stone's Ruination! This has that beat by a zillion miles! This is the real deal! It's even taking me super long to write this review because the bitterness has cleansed me from all possible concentration.

The Homebrewer's Garden: How to Easily Grow, Prepare, and Use Your Own Hops, Malts, Brewing Herbs 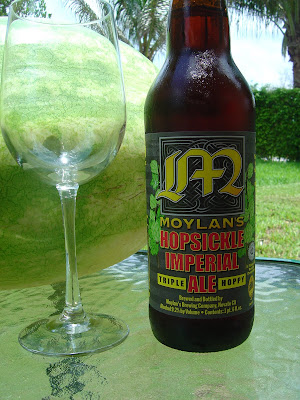 Do you see how creative I am, hauling the watermelon I just harvested from my garden into the picture? Sorry, I lied. I bought the watermelon at Publix this morning, but what about the creative set up? Huh? Finally, this beer came back from my friend's DC trip a few weeks back. Thank you very much!
Posted by Beer Drinker Rob at 3:25 AM

Here I go again...Moylan's is an old local of mine. Decent selection of beers and very friendly people. I agree with your comments about Hopsickle tho...needs a better balance. I prefer their Kilt Lifter Scottish Ale.

Thank you for trying again. I really need to take a trip to California and check out all the breweries up and down the coast!

There are other more-balanced options that I prefer than Hopsickle, but when you said Kilt Lifter, I checked and there is another beer with that name. Did you know that? Same friend brought it back from a Phoenix business trip.

I have seen these before but never picked them up...now I will.

You should definitely check it out. Much more local for you.