Happy Father's Day! Paraphrasing Twitter friend and Heavyweight Boxing Champ Buster Douglas, "We need good men in the USA!" My father is a wonderful man and great role model. I hope I am even approaching equaling him with my two children!

I am working a little backwards as I already wrote the beer review below. But this beer reminds me so much of growing up in Pennsylvania and Hershey Park that I felt the need explain. Where I grew up in central PA was only a few hours from Hershey, PA. So I've been to Hershey Park and the chocolate shops a few times, you could say.

But Hershey is also the home of the Scholastic State Wrestling Championships (nothing like Pro, Ed Roberts), which is a huge deal in that state. To make thing more awesomer, I was a state finalist two years during high school, finishing as high as 12th place. The arena was spectacular, the fans wonderful, the Hershey Country Club--snobby enough for my teammates and me. Oh to be 18 again, except for the three more years of not drinking, legally! BTW, the guy above, Ray Brinzer, he is the one that used to kick all asses in my weight class, hands down! He made weight one day in 1989 or 1990 by removing his glasses, and that is no joke!

This afternoon I'm drinking Mokah Imperial Stout, brewed by Southern Tier Brewing Company in Lakewood, New York. Mokah is brewed with chocolate and coffee and is a combination of two other beers in Southern Tier's Black Water Series: Choklat Imperial Stout and Jahva Imperial Coffee Stout. As usual, the presentation of the beer in its 22 ounce bottle is high quality. Serve at 48 degrees F.

Big aroma! Rich chocolate with light coffee, very sweet. Massive chocolate flavors up front, so creamy and delicious. Smooth with an amazing texture. Coffee seems to be an afterthought in the flavor profile, but it does exist providing an interesting little nugget to think about. There are also some roasted and burnt aspects, and you will taste everything as this beer completely coats your mouth with every sip. Not too sweet with some bitterness present. The 11% alcohol will not be missed. It is a giant yet welcome component as the beer progresses. By the end of big 22, it's even a little boozy, yet no one would question it as anything but an amplifier of amazing flavors and a warming beast. Chocolate syrup, very malty, tastes like an ice cream flavor by a name brand maker, just amazing. At the end, the alcohol is making me feel like a fire breathing chocolate dragon. Or I could be hallucinating from chocolate overload! Get this now! 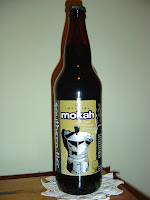 Looks like I have another beer to try. Also wanted to say that I enjoy the blog.

Why thank you, SirDDawg. Yes, this one is a treat and as the bottle suggests, could be a dessert itself.