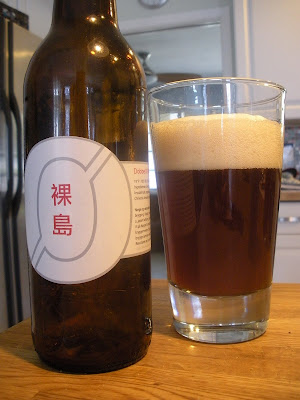 Tonight I have a special guest reviewer! Vanessa from the Potables and Edibles Blog was kind enough to send me a review this afternoon. I first met Vanessa online at her Twitter handle of @EmpireVanessa; however, it wasn't long afterward that we met in person at Beer Tasting Extravaganza: Coffee District Edition.

Vanessa was the home brewer that brought #24 and #25 in our tasting that night. She's also the woman who's tattoo I took a picture of at the end of the evening. (If you have any first-year detective skills, you'd have already known that; but I know you guys!) Anyway, if you get down to South Florida, you can potentially meet Vanessa, but be sure to learn Australian before you come. (Yes, I know they speak English. It was merely an accent, spelling and word-choice comment. Jeez!) You can see why Vanessa was happy to be seated at the opposite end of the room a few weeks back. Finally, here you go... Thank you, Vanessa!

This DIPA (or IIPA if you will) is a collaborative effort between the Norwegian brewery Nøgne and Japan's Yoho Brewing. I've had this one stashed away for a couple of weeks (yes that is an eternity in our household!) but the gorgeous label was singing to me from the shelf of the beer closet yesterday!

I poured a half glass, meaning to split the pint of it into two glasses (sharing is caring, people!) and suddenly the top half of the glass was packed with some kind of über-froth! It was like that spray foam stuff, trying to fill up every free molecule of space in my glass! The picture was taken as the head was still expanding by the way...crazy stuff.

So after the excitement (ahem) was over, the head retreated to a slightly more reasonable inch in height, with a coppery tinge to it. The beer itself was a beautiful coppery amber colour, but definitely not a clear one; there was no seeing through to the other side of the glass at all. The ridiculous head retreated slowly during the time it took me to drink it, and left really beautiful lacing down the inside of the pint glass.

The aroma was certainly a good bit less hoppy than I would have expected from a DIPA with 100 ibus; I only caught a touch of some grapefruit and some floral perfumes. There was also a whiff of something doughy - kind of like raw pizza dough, and also some candi sugar. I was really impressed at how balanced the taste on this was; at 100 ibus I really expected a punch in the face, but the malt backbone on this one really stands up to the hops. There's some grapefruit/pine hops, some dried apricots and a little spiciness on the end that tastes a little like pink peppercorns.

I liked this beer a lot, but at 8% and this drinkable I suspect it would knock me on my arse pretty quicky! Scores a lovely A.

wow, I've never even seen it before. She made it sound amazing -- very eloquent, lyrical post. Much different than your usual dry wit. Bwahaha.

Yes, Vanessa definitely classed up this joint. She speaks like she writes, too. I haven't seen that beer either, but I really do need to go spend some time in the non-US beer aisle.

I haven't seen this one locally, but total does stock some of the Nogne beers; I picked it up at http://oaktreewines.com

Absolutely! You didn't even curse. If it's not true, though, maybe it's the accent that's throwing me.