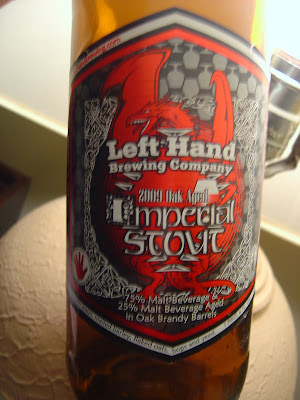 That cocksucker Joran van der Sloot got arrested today in Chile! This is the prick that was obviously involved with the death of that Alabama teenager Natalee Holloway exactly five years ago. But he's being arrested today in connection with the killing of another young girl named Stephany Flores. I hope they have the death penalty there or at least some place where he can rot in a rat-infested, blistering-hot labor camp while being treated ??humanely for the rest of his fucking life!

Tonight I'm drinking Oak Aged Imperial Stout 2009 brewed by Left Hand Brewing Company in Longmont, Colorado. This Russian Imperial Stout is part of their Big Mo' Series and features and electric red foil dragon on the label. This is 75% malt beverage and 25% malt beverage aged in oak brandy barrels for 9 months. According to the bottle, it's the "perfect warmer for chilly winter nights". Fuck! It's a 90-degree Florida day in the beginning of hurricane season!

Chocolate and cherry aroma, rich and smooth, with a touch of licorice. Very appealing! Nice flavors to begin. Creamy and silky chocolate flavors and texture right away. You will notice a big alcohol component immediately as well, but it is doing a nice job accentuating some terrific cherry flavors. Secondary yet not at all hidden flavors include vanilla and licorice; there is a hint of oak but more of a brandy flavor from the aging process. A definite sipper, this guy! It has that "I'm breathing pure ethanol" characteristic, but the high alcohol works and keeps the chewy thick body in check. A nice beer to check out if you find it; however, 22 ounces was plenty! Another tip: don't drink it too cold!

Best of the Best ~ Eric Roberts

Aruba: The Tragic Untold Story of Natalee Holloway and Corruption in Paradise 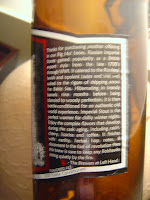 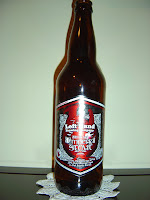 These pictures are the "Best of the Best"! No, not like when Tommy knocked out Dae Han with Julia Roberts' brother screaming at James Earl Jones. "NO! Coach, he's gonna kill him. TOMMY, NO!" Good flick. Bad pics. Too bad!
Posted by Beer Drinker Rob at 6:12 PM

This is a great beer. I will always remember it as the first craft beer I ever had on draft...it was a strong one to start on, but like you said is very well balanced and really enjoyable. Great review.

Wow that was a big memorable beer to get you going? I'm pretty sure everyone has had Sam Adams beers, and they are favorites of mine. But the fight rages on about whether Boston Beer is a "craft" beer.

Thanks for the compliment. Hope you'll stop by again!

I'm totally drooling. Sounds so good. No cough syrup aspect though? I get that a lot with cherry and high ABV and I get totally turned off.

The brandy and alcohol were totally in control here, but cough syrup didn't enter my mind until you said that.

I think the cherry was more muted than I suggested and the "pure alcohol rush", which did exist, was not so medicine like.

If you try it I hope it's not to cure a cold. I didn't get that, though.

LOVE oak aged imperial stouts. Yeti is great, too. I've got some bourbon aged Old Rasputin xii in the fridge too - can't wait to try it!

Hey Hannah. Good to see you. Personally, I can live without the oak aging (bourbon, too, which wasn't part of this beer). But I do like Imperial Stouts a lot!

This sounds very interesting. I would love to find this near me somewhere.

I was wondering the same thing about the high ABV cherry cough syrup thing. Glad to hear that's reined in by this beer.

Worth a try if you can find it.