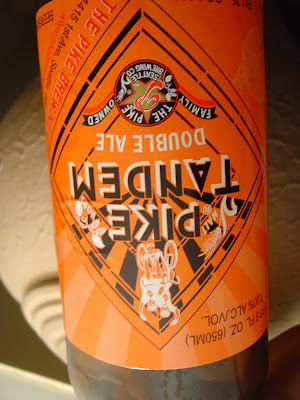 That Ed Roberts from Total Wine just keeps getting cooler and cooler. Now he's going to have a small group do a tasting of the beers from the newest brewery in town--Pike Brewery. Total Wine recently stocked seven new 22 ounce bombers (remember I shutter to use that elitist-sounding word) at which point I stocked seven new Pike beers in the box in my dining room where I store a beer or three. The catch with the tasting is painful, but I think do-able (no jokes, Joel Kodner)--it's in Boynton Beach! Ugh! If Delray, where our last meeting was, is like the moon away, then Boynton is closer to the sun. Next thing you know they'll have a beer festival each year in Jupiter or something!

So this evening, in celebration of post #600, yet because I decided to start mourning the US loss to Ghana, I picked out a beer from Pike. I will be drinking (you guys know I already started) Pike Tandem Double Ale brewed by The Pike Brewing Company in Seattle, Washington. The label is bright orange with black and white accents. Stands out nicely and is a strong presentation. There are two bikers on the label, but until I figured out that "tandem" was referring to their bike, I thought they each had their own. Appropriately named, I guess.

Caramel, molasses, maple syrup, butter aroma--I'm pretty sure those are all at least second cousins. There are some dark fruits in the aroma as well. Sweet flavors start things off. Raisins, dark fruits and an unmistakable cherry and cola combo. Seriously there is Cherry Coke in this! Also some wood and chocolate all wrapped together in this thick textured beer. Creamy, good carbonation. Some citrus and slight hoppy bitterness and the 7.00% alcohol decided to jump on that initial sweetness just in time, providing a good balance. Not bad. I think the flavors could have been a little more complimentary with each other, and I'm not sure, but I feel the raisin aspect was a little strange though I loved the cherry. Better as it warmed up a little too, and with 22 ounces, you have some time. Not a bad first one from Pike!

By the way, no matter which way I turned the bottle picture above, I couldn't shake those riders off. Wear your seat belts, people! And your helmets on bikes (I'm a hypocrite) and motorcycles (not a hypocrite), law or not! The ER is not a nice place, and I spent my share of time there with Dr. Dad growing up, sometimes because of the lack of seat belt and helmet wearing!

Who knew "Tandem" had so many diverse uses?

Adventures in Tandem Nursing: Breastfeeding During Pregnancy and Beyond 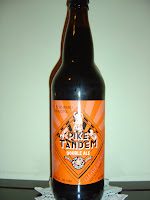 you know how I feel about raisins...

I love raisins, and I even like them in my beers, but I am pretty sure you and the Cooking Asshole have put this evil little plot inside my head not to like them.

For this beer, just seemed a little strange. But the dark cherries, great.