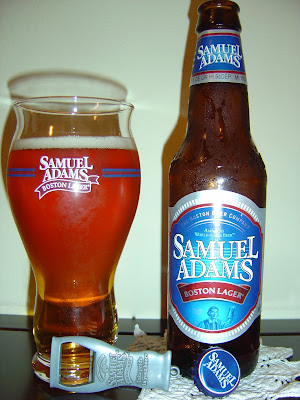 There has been a bunch of buzz lately that Boston Beer Company, maker of the Samuel Adams beer line, might lose its "craft" beer status as it crosses the 2 million barrel per year production mark sometime in 2011. I've seen a lot of arguments that Sam Adams isn't a craft brewery because they are publicly traded or they "sold out" or dozens of other reasons. In my opinion, those arguments are horseshit. This brewery is the definition of a craft brewery.

But this craft status really isn't about that argument. It's a discussion about business and money and how much the government can tax these guys for being successful. It's a little arbitrary to set the bar at 2 million barrels, but there are many thresholds like that everywhere. Instead of arguing within the beer-drinking community, we should support this brewery as one and have the threshold doubled or tripled. No one would argue these guys should be lumped together with mass producers like Anheuser-Busch. Anyway, if that doesn't work, they should just make the barrels bigger so they don't hit 2 million! Just one guy's thoughts.

Tonight I'm drinking Samuel Adams Boston Lager brewed by The Boston Beer Company in Boston, Massachusetts or Cincinnati, Ohio or Breinigsville, Pennsylvania. "What do you mean? I thought you drank this beer all the time." Yes, thank you for paying attention. What I meant is that I am drinking it, and you are going to get a review! Not like this pathetic post from the first week when I started this blog. You are right, this is one of my all-time favorites, and I've been known to drink one or two now and again. Enjoy before October, 2010.

Hoppy and malty aroma with some tea characteristics, very distinct and I could identify this across the room. Hoppy with pine flavors, just a hint of citrus, too. Malty sweet caramel but enough bittering hops to keep this perfectly balanced. There is a good little spicy and hoppy bite nibbling at my palate and that distinct tea flavoring is there as well. That herbal quality is very noticeable, and I can understand why some of my friends think there are marijuana-like properties in play. Creamy medium carbonation, medium body, wonderful flavors, easy to drink. I might be preaching to the choir; I really don't know. It is hard to believe that everyone hasn't had this once or twice or more, but I could be wrong.

Let me know what you think about the beer. You can chime in about the business aspect too, if you like, but please only well-thought-out statements. I don't want this to become some Fox Business or MSN Money Comment thread. By the way, if you like what you read at this blog (or even if you don't), do me a favor and tell a couple of your friends about the site. Thank you in advance; it's greatly appreciated! 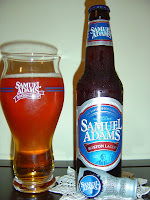 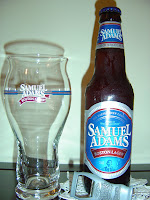 Sad empty before. Happy full after. "But how is the glass full and the bottle still has the cap on it?" Duh, it's another bottle; I bought a 12 pack!

This is a little gem I bought at Costco a few months ago. While the beer is long gone, the memory isn't. A 28-pack! 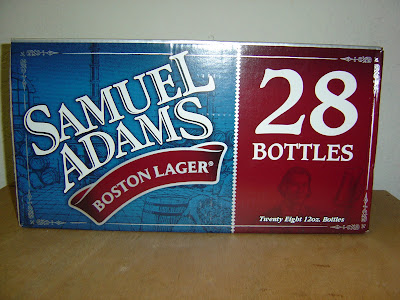 I've never been a huge fan of the flagship beer, other than when I'm in Red Lobster and the other choices are BudMillerCoors. I really enjoy the seasonal releases, especially Summer and Winter ales.

I think a lot of people got turned off when they released the Sam Adams Light, maybe because it seemed like a macrobrewish move.

That said, the beer is still head and shoulders above the macros and should retain its "craft" status, at least as long as it is under its original ownership.

Yeah, I hear you about the Light version and perception. I think I only had that one time.

I was only joking about the barrels. If the law is really defined by barrels, it's a stone-aged law. You know, I'm 18 "hands" tall.

But I guess they could go to that expense if it's worth it. However, it'd be risky since one more law change would make them a costly loophole attempt.

I actually really enjoy Sam Adams too. It's not my favorite, but it's a wonderful "go to" when I'm out to eat. I like that the brand that began the craft beer revolution in America is widely available and still well regarded. I really enjoy their Flagship and their Oktoberfest. I will say, most of their beers have a very recognizable taste across the whole brand, and that does tend to bother me a bit (especially with the Longshot Packs... I want to know what those beers tasted like before they were Same-Adamized). I will admit to enjoying this beer though.

I don't believe that Sam Adams should be stripped of their Craft Beer status. They pioneered the craft beer revolution, and they still make beer that is superior in quality and taste to the big guys, and they still produce way less beer. I hope that lawmakers continue to work with them.

This is always my go-to beer when whatever dive I'm in doesn't have an IPA on tap. I agree with Gerald that the light beer seemed like kind of a "pandering to the crowd" move. But I understand. It came at a time when everyone was into low-carb and all breweries were struggling to distinguish themselves from one another. And all the new varieties they've introduced in the last 10 years (more than 20 by my count), also demonstrates their ability to stay relevant and keep up with current trends.

Ha love this review. Boston Lager is a nice beer for the market. I feel like it occupies a niche that nothing else has really encroached on yet.

By the way, I LOVE their special beer glass. That is my go-to glass for all my beer tastings now. I hear it's pricey, but I got it as a gift.

Hey Royce. I'm drinking one now, but from the bottle. I love the glass too, though I'm a bit embarrassed about how I got mine. I saw them for sale for $15 a pair at Total Wine.

I got some other Sam Adams stuff (hat, shirt, bottle opener) after letting them know their bottles were breaking. http://www.dailybeerreview.com/2009/12/holy-sheet-uber-abbey-ale.html

This may not be saying much, but a Sam Adams Light has more flavor than any regular macro brew, let alone light beers.

Welcome. That is saying a lot. No doubt about that Sam Adams Light statement.

Sam adams is nowhere near world class craft beers like samual smiths or many others. Its overly hoppy character produces and endless aftertaste that is awful. Don't waste your money on this overated swill. For a near religeous beer experience try belhaven scottish ale

I guess you're specifically talking about the Boston Lager as Sam Adams has dozens of beers in their portfolio. Boston Lager overly hoppy? Really? Swill? Hmmm. I think your analysis is very poor.

I really enjoy this beer a lot, it would be my go to if it weren't for the price($10 a sixer in my neck of the woods). There Octoberfest and Winter lager are really good as well! As far as them losing their craft status...as long as the quailty doesn't suffer who really cares, I mean seriously!

This post is over two years old. The Brewers Association, which defines what a craft brewery is, decided not to kick its most successful member out (Sam Adams), and upped the barrel limit to like 5 or 6 million barrels. It'll be a while until they need to address that issue again.

Thanks for stopping by

Love it. Delicious and balanced. Keep your over-hopped,over-priced IPAs.T his is an American "German" beer. Uniquely American but crafted to the high standards of of balance, subtly, and sophistication of German brewing standard. My brews: SNPA, SABL, Foubers Dirty Bastard Scottish Ale is my dark, and Duvel when in the mood for a Belgium. Boom. Beer bliss.