What an excellent sports day (at work)! The USA soccer team managed about a hundred awesome opportunities in their game against Algeria, but decided not to score on any of those until the last few minutes of the game. Final result 1-0 meant they won their group. Without that goal they go home! Was awesome to see them keep kicking the ball into the posts and crossbar just to keep it interesting for the American people, and then finally finishing it off.

Then I was back to work when I heard about some tennis match tied at 39. OK, that's WTF enough to look into. Yep, John Isner and Nicolas Mahut were in their second day and tied in the 5th Set. Thanks to having the ESPN3 gear all set up because of the soccer, we watched that match to a 59-59 tie suspended for the second time for darkness. That probably helped Isner as he was absolutely exhausted to the point of not being able to move. Really, aces and nothing else for him. Can't wait to see more tomorrow, though I bet it's over within an hour since they will both be rested! They've already played 10 hours though!

Tonight I'm drinking Shiner Blonde brewed by Spoetzl Brewery in Shiner, Texas. The gold lettering on dark blue background makes things tough to read and is a bit weird for a Blonde. The label goes on to say that in Shiner, "Blonde is on tap at gas stations". Now there's a really good idea!!!

Twist off. Grain, typical lager aroma, very faint. Super thin and watery beer with zero flavors. Really, it's just smooth, creamy water! There's not even a little bite or anything. Faint corn, barely sweet, medium carbonation, a very weak beer and offering. Sorry to report that to you. 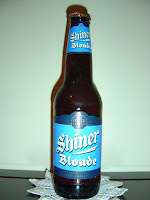 ha! This was my favorite beer in college -- before I knew what good beer should taste like.

I bet you liked it because it didn't taste like beer at all!

It was a great sports day! Don't give up on Shiner based on the Blonde, though...the Bock is my favorite, but I also enjoy the Kosmos Reserve.

Good morning. If you type Shiner into the search box, you'll see that this is the fifth or sixth Shiner beer that I've had and reviewed, so I haven't given up on Shiner. This one was the worst of them, though, if memory serves me.

I like the Bock and haven't had the Kosmos Reserve.

Thanks for stopping by and letting me know what you think.