Anyone who is in love with President Obama and the Democratic party and can't take a little political satire should just skip to the beer review.

Now, we've all heard from Joe Sestak that he was offered a job by the White House in exchange for ending his primary campaign against Arlen Specter. I'm pretty sure that the ambassador was even identified by the White House as President Clinton himself. That kind of bribery is illegal, by the way. Let's see what happens with that story.

So now that the Chicago Blackhawks have won the Stanley Cup and are surely planning their photo opportunity and White House visit with home-town President Barack Obama, a couple of thoughts came to me. I think you guys are smart enough to know where this was going. LOL. Just thank God we have Vice President Joe Biden as a Flyers' fan to balance the ticket!

Finally, I am now 0-2 in betting a beer that the Flyers win a particular game. That added to my lovely mood last night and moreso when I was reminded this morning so charmingly. :)

Finally, finally, I asked myself the question, "Is there a bitter enough beer to pair with this Stanley Cup loss?" The answer... NOPE! Not even that hungry tiger Moylan's Hopsickle!!!

Tonight I'm drinking Snapperhead IPA brewed by Butternuts Beer & Ale in Garrattsville, New York. This is the third and last can to come back from my friend's DC trip.  The can depicts a cool green fish with shades and headphones listening to some tunes.

Malty, bread and candy aroma, perhaps some light hops, too. Very malty flavors, with sweet toffee and caramel right away. Those flavors are pretty nice. Which is when an extremely angry astringent lemon flavor hits that. It's not a bitter balance answer to the sweet; rather, it's a nasty side sour and metallic flavor. It is pretty hard to see how this is an IPA. Anyway, the sweeter flavors are OK, but the lemon rind component is awful!

The Blind Side ~ Sandra Bullock -- #27 Video on Demand 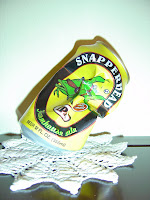 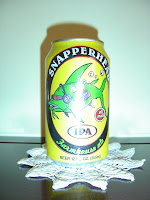 it's not lemon rind, it's hop bitterness. your palette needs to learn multi-dimensional flavors, not just one!

Thank you for your input, Reinkster. If you would have bothered reading the entire review, I clearly wasn't suggesting lemon rinds were added into the beer. I know that flavor comes from the hops.