Tonight I'm drinking Undercover Investigation Shut-Down Ale brewed by Lagunitas Brewing Company in Petaluma, California. Nice dark red and green colors stand out against the eggshell background on the label. Some other breweries should take note of that! Around the edge of the label is a story, as usual. "We brewed this especially bitter ale in dedication to all of the world's would-be astronauts, in remembrance of the 2005 St. Patrick's Day Massacre on the Brewery Party Grounds and also in joyous celebration of our 20-day suspension that following January. Do the crime. Do the time. Get the bragging rights. Cheers!" Also as usual I am not going to try to pretend I understand all of that.

Very hoppy aroma and a little fruity. This beer starts out strongly bitter with a nice spicy bite nipping on my palate. Then a rush of sweet caramel comes in, rich and thick and well, sweet. Those peppery flavors, though, they never go away. The 9.75% alcohol is noticeable after the initial bitter and sweet duke it out, slightly boozy but mostly not an issue. There are several prominent flavors fighting in this beer, some pretty good, but they never harmonize, and that destroys the experience for me. Too much all over the place, not my kind of beer. For some reason, I feel I've said that on a few other occasions for this brewery too.

What Every BODY is Saying: An Ex-FBI Agent's Guide to Speed-Reading People 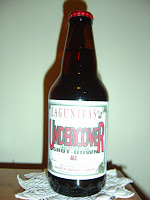 I love this beer. If it's available, I'll drink it. :) It goes down pretty easy for a beer with almost 10% alcohol.

This beer is named for the 20 days the brewery and tasting room were shut down because the Alcoholic Beverage Commission caught someone enjoying some green in the beer garden. It's a longer story than that... but yeah, it's a good story. http://blog.originalalamo.com/2010/05/27/the-badass-tap-lagunitas-undercover-investigation-shut-down-ale/

On draft at Stubbie's and Steins

Thanks for the research, the story and the photos. That's pretty much more than any other commenter has done for me.

Whenever you want to do your own review, the door is open!

Just saw this beer in Total Wine and almost bought it. Now two #FlaBrew tweeps disagree on how good it is. I suppose the only thing to do is to buy some and try it for myself.

Well, yes I guess "love" and my description aren't in the same part of the spectrum, but I didn't really bash this beer. It was just OK for me.

It's definitely cheap enough to check out a bottle without any guilt! Plus Amie has good taste.

(Gerard, that means you HAVE to buy some!)

Now boys, don't go and say that it must just be the girls who love it, because I have a peanut gallery behind me who are currently also singing it's praises! I'm working on a new home brew recipe that works off the same profile as this, but not quite so hot. Will pass some along when it's done :)

OK. Can't wait for the homebrew. If everyone else loves it, wouldn't be the first time I was on my own hill.