Hmmm. Where to start? Well, I went to bed at the beginning of the fourth quarter of game 7 of the NBA Championships with the game practically tied. Hey, I told you I don't give a shit about pro basketball, and that should prove it to you. I woke up to find out that the Lakers repeated as champions and that their fans repeated as well in torching the city. Congratulations to both groups! Here was my recap from exactly one year ago today, with a New Belgium review.

Then I watched the World Cup match where the USA beat Slovenia (update a few hours later: I had written Algeria, but thanks to friend Claire (UK, great art and blog, a bit bitchy, check her out), I have it right now; btw, don't piss Claire off), but thanks to perhaps the worst officiating in history, they walked away with a 2-2 tie. The most outrageous call came when the official called a foul he couldn't explain on the guy who didn't touch anyone and scored the goal while two other US players next to him were being assaulted in the box right in front of the goal keeper! NO GOAL? Fuck you, Referee Koman Coulibaly! Here is a more professional account of the win.

Then the electric storm to end all electric storms came. Holy wow! My office parking lot was literally a lake, with a wake and all. We lost electricity, so I took a short nap and went to lunch.

Power came back on and the sun came out. So I briefly rapped with Heavyweight Champ Buster Douglas on Twitter about his new book (Amazon link below). Don't forget he knocked out an "Unbeatable" Mike Tyson! Anyway, he's very approachable and a super-nice guy.  Which is when we lost electricity for another hour. We happily watched from our windows as angry motorists honked and gave each other the finger in the busy lightless intersection below. Great times!

Tonight I'm drinking Woody Creek White, a Belgian-style wit beer brewed by Flying Dog Brewery in Frederick, Maryland. Apparently, the Flying Dog founder George Stranahan is often considered the unofficial mayor of Woody Creek, Colorado. Thus the name of this seasonal. Art work as usual is pretty crazy. For what it's worth, this number was stamped on my label and I thought it may some day come in handy: 015FX11

Fruity aroma, with a hint of coriander. Not particularly powerful. Wheat and big spicy flavors kick things off, with coriander and cloves at the forefront. I am not in the habit of eating moldy bread, but that thought crossed my mind a few times while drinking this. Plenty of citrus orange then lemon backs those flavors up, giving a citrusy bitter, which was fine, and an unpleasant sour that I didn't enjoy at all. The carbonation was strong and harsh. The 4.8% alcohol was not a factor at all. Refreshing. A little bit different and a decent average beer. Try it if you'd like. 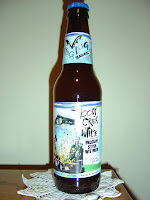 Thanks, Claire. Did England win today? I seriously don't know. You saw I was without power at that time.

Anyway, I corrected the error and everyone should go check out Claire's blog.