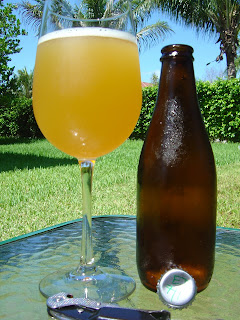 First. The Mary Poppins meeting at Borders in Plantation was a disaster! I arrived with my four year old and plenty of time to spare for her 10am appearance, along with hundreds of other people. However, there was one woman in the entrance to the store disappointing family after family that the book signing was limited to 200 people and it was completely full. There was one little girl that was a little sadder than the rest, too. Apparently people had lined up at 10pm the night before. Yeah, I know. I was thinking that too!

Really? It would have been really a terrific idea for Borders to let the public know that the engagement was so limited. Two hundred? Sold out? Borders should be ashamed of itself for not including either of those pieces of information on their website! Even if it sold out 1 hour before the event, how freaking difficult is it to put that banner on their event page? Let me answer that for you... it is so easy a drunk monkey with no arms could do it in half a second.

That piece of information would have saved me the trip all the way from Miramar and back and the disappointment of my son. Furthermore, we would have joined the rest of the family that went to the beach instead of making these plans that we considered (stupidly) a better opportunity. Oh, and I hope that Julie Andrews isn't an environmentalist, because the amount of gas I wasted today with my round trip and my peeling out of the parking lot in an angry rage would probably have upset her. Is 200 really her upper limit? What, the hand or smile hurts after that? She was tougher with Jane and Michael Banks when she made them clean the nursery! What happened to “In every job that must be done, there is an element of fun. You find the fun and... SNAP! The job's a game!” I guess old(er) age must have set in.

Well, if an event is so limited, people need to know. If an event is sold out, that needs to be posted immediately. In my opinion, if 200 is the top, you may as well not even show up. I stood in line with thousands of people in the East Village one night in the 90's, and Lenny Kravitz kindly spoke to and autographed every single item people brought. Finally, I will never shop at Borders ever again!

This morning I'm reviewing El Jefé Hefeweissen home brewed by Vanessa from the Potables and Edibles blog. Don't correct me on the Hefeweizen spelling. When you brew your own beer, you can name it what you want and spell things any damn way you please. I took the spelling right from Vanessa's handwritten notes. The cap was written in Japanese (not really, unless it's upside down), but since that's the only identifier, it says EJ 7/1.

Great aroma with plenty of banana and fruity peach, wheat. I kept thinking "very clean". Banana flavors start things off. This beer tastes so fresh. Fresh fruit and lemon citrus are the most noticeable flavors. There is a wheat flavor but more than that, it adds some texture. Lightly sour and refreshingly tart. So awesome for a hot summer morning, with hot being the temperature and my temper. Medium body and carbonation excellent. Vanessa said this one clocks in at 5.8% alcohol. I guess I'm gonna have to visit Palm Beach County more often! Thank you for the opportunity to drink your creation. 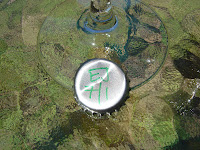 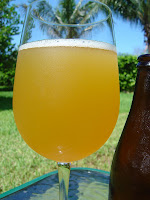 Look at that beer! Bet you wish you had some right now. Am I right?
Posted by Beer Drinker Rob at 11:56 AM

Banana flavor on a beer? and you call my Micheladas gross? jajajajaja

What a bummer the Julie Andrews thing, sorry man.

They better watch out! Hale's Ales as a hefe by the same name!

Aw, you're too kind; I'm glad you enjoyed it!

I am in fact pretty happy with how this came out - I'm glad I threw the BJCP stylebook out the window and dry-hopped with Sorachi Ace, it really enhanced the citrus nose :)

BTW, the "japanese" characters are to make it easier to find beer in our "cellar", they're generally labeled with the date of bottling (i.e. 7/1) and the initials of the name of the beer (if it has one yet) or the style of beer. See? Simple!

Cool. I didn't know you used that hop (and glad you didn't tell me up front). I really did like that lemony crispness in the flavors.

If major breweries can dump the BJCP book, then you shouldn't have a problem doing it.