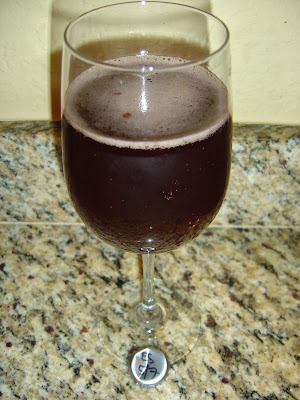 The first was Vee's Pale Ale and the second was Caught Off Guarde.

This afternoon I'm drinking Essence of Skank, an apple black currant beer-cider home brewed by Vanessa from the Potables and Edibles Blog. Now I do not know the origin of the name, but I double-checked the legend Vanessa gave me and yep, that is its name. I type Skank into Google and the results are pretty hilarious. Personally, it brings up thoughts of Courtney Love, Amy Winehouse and Lindsay Lohan. The essence of those "ladies" is probably pretty nice, I'm guessing. Bottle ID: ES 5/7.

I wasn't expecting the ruby red color that came out of the bottle. There were little bits and pieces of something floating around, perhaps some fruits? Berry aroma, fruity, yet some dirty laundry in the background. Flavors start out nice and tart, with an interesting mix of berries and wet dog. Quite funky... Is that the skank I am tasting? I was tipped ahead of time that this was a beer-cider, but I can totally taste some cider characteristics. Vanessa told me the alcohol content is 7% and it wasn't really noticeable to me. This definitely took some getting used to, and though I could appreciate the tartly refreshing flavors more toward the end, this was probably my least favorite from Vanessa's brewery. 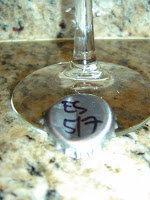 I can totally understand this being your least favourite, in fact it's my least fave too.

I made it for a friend who loves ciders and did not expect the blackcurant to completely dominate as much as they did! It's way more sour than I had anticipated - although from the feedback I've been getting from sour-lovers, that is a good thing?

While it's interesting, I'm not expecting that this will be a remake any time soon :)

So no comment on the naming of this? It's going to remain a mystery? Open to our imaginations?