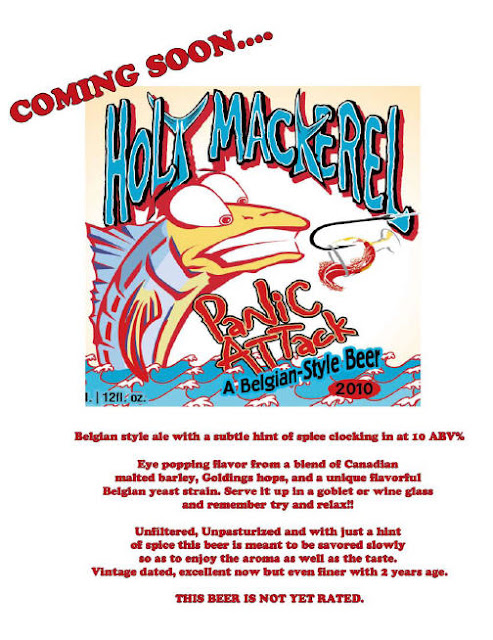 Usually I introduce my guest reviewers, but I'm pretty sure you all know Ed since you are such loyal readers. And Ed introduced himself anyway. I was invited to the tasting Ed went to last night, but after a few reschedules and plan changes, I couldn't make the one that ended up happening. My loss, but you and I can all live vicariously through Ed. Here you go! Also, I asked for a photo, so that may or may not happen. Ed has one of those fancy cell phones that take gallery quality pictures, so I'm hopeful! Update 7/4/2010: Ed didn't take any pictures so he sent me this poster emailed to him by Bob Gordash. Read it carefully for some surprises.

So this is my first guest review for Daily Beer Review. I did do some guest blogging for Dos Beerigos a while back. I normally keep my thoughts to my personal Twitter account at twitter.com/Ed_Roberts. Follow me if you know what’s good for you.

I am the infamous Ed Roberts of Total Wine fame that Daily Beer Review always mentions. If you have been reading his blog for any length of time you might be thinking I must be compensating him in some way for all the positive mentions. I can assure this is not the case! :)

My first post was worthy of a special occasion. Recently, I was informed by our local brewer, Bob Gordash, that he had a new year round beer being released. His current offerings are his Holy Mackerel Special Golden Ale, a Belgian strong golden ale, and Mack in Black, a imperial black ale with pomegranate juice.

I attempted to get several of our South Florida beer blogging friends together for a preview tasting with Bob. This was supposed to include Dos Beerigos, Mike Loves Beer, EGA Brewing, and our hometown Daily Beer Review. This proved harder to pull off than scoring a goal at the World Cup.

Bob has two official launch events for his new beer called Panic Attack. The first is tonight 7/3 at Stage 84 in Davie, FL at 7pm (till 2am). There will be live music and appearances by the Miami soccer club cheerleaders. The 2nd event is this Monday 7/5 from 7-9pm at Hurricane Grill & Wings in Plantation if you can’t make tonight. Meet Bob the brewer at both events and give him your thoughts on the new brew.

I couldn't make either of these events so I called Bob and he made time out of his busy schedule to meet me at Stage 84, the official Holy Mackerel Taphouse, Friday night for a small preview tasting. I brought Tony, from Exceptionally Good Ales, who posted his thoughts here.

Bob told me this was a kid friendly place so I brought my wife and four year old son. She took one look inside and took him to Kabooms Party and Amusement Center next store instead. There was a live band which was pretty good. Apparently the lead singer is an eleven year old autistic kid. Very impressive. He plays there frequently. Sorry I didn’t catch the name.

On to the main event here, the beer. Panic Attack is an amber colored Belgian style beer that clocks in at 10% ABV. There is no clear cut beer style here. Try it and decide for yourself.

The beer pours with plentiful head and I just loved the beautiful amber color. On the nose I picked up the typical Belgian yeast influence and not much else. As it warmed up I expected to catch other notes on the nose but that never really happened. The only other note I would say I picked up was the alcohol presence.

I got an attack of flavors in my mouth on tasting the beer. The alcohol presence, while not too overwhelming, is very present.There are layers of flavors and complexities here.It has a really nice mouth feel and carbonation level. I get raisin, some biscuit, toffee, and alcohol. I really felt I should be able to pull more flavors but I guess the alcohol is masking them. I also get a battle of sweetness and some dry, tart notes that battle in different parts of my tongue. That was pretty interesting.

I rate this beer a 90 out of 100 points. I feel this is a neat addition to the Holy Mackerel beer family. It stands on its own. It is a completely different experience than the others. Bob suggests laying down his beers for a year or two for an improved experience. Of the three beers he makes now, I see this one really benefiting the most from this suggestion. If you have no patience, drinking now is a fine experience as well!
Posted by Beer Drinker Rob at 2:03 PM