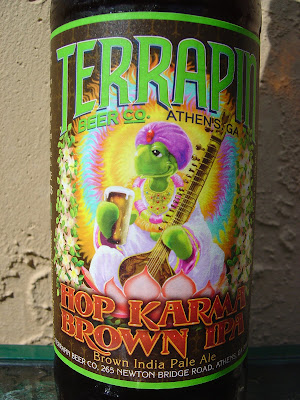 Good-bye. I'm resigning. Signing out! Actually, no such luck for you! I'm just going on vacation tomorrow afternoon lasting all the way through next weekend. Don't worry, though. I've been working overtime to be sure that you still get your daily dose of me and a beer review, too. There will be at least three guest reviews next week. A fourth will depend on HomeBrew Vanessa (surely you remember her from this month's reviews). She was doing some extra-credit report or something last night... You will also get a handful of reviews that I've done over the past month.

It'll be like I'm really around. I promise. That is unless you usually venture over here from inane-time-waster Twitter from where I promote my new posts daily. If that is your usual route, I suggest that you sign up for a daily email in the right column because there will be none of that for ten days! Yes, I know that there are ways to make any new posts go up as a link on Twitter automatically, but I find those to be lazy and spam-ish. If you'd like to promote any post that you find worthy this week, please feel more than free to do so. You'll be my hero!

Tonight I'm drinking Hop Karma Brown IPA brewed by Terrapin Beer Company in Athens, Georgia. When I bought this last week, I knew it looked familiar, but searching and searching the blog I found nothing. So I dug around elsewhere and saw that this used to be called Terrapin India Style Brown Ale. Aha! Found you old review from last October. I am 98% sure that they are the same beers. Photo verification would have been helpful, but that ain't gonna happen.

The label says that this beer is a "head on collision between a hoppy west coast [IPA] and a malty, complex brown ale]. They used 5 hop varieties and 7 kinds of malt to achieve "PEACE, LOVE and HOPPINESS". The label depicts a turtle playing an Indian stringed instrument. I want to call it a sitar but am not sure. They play them in the windows of the Indian restaurants on 6th street in the East Village, NYC. Best If Enjoyed by: no notch. I took the liberty to chip out pieces in Month 10 Week 3 No Year Option Available.

Hoppy and malty aroma, chocolate and nuts stand out the most for me. Nutty and malty flavors kick things off, but there is a definite hoppiness and citrus flavor behind that. There are some brown sugar flavors that contribute to making this on the slightly sweeter side, but this is mostly a very bland beer. It is creamy and smooth, but it is also thin and flat. The ending is dry. I didn't really enjoy the beer. Not so sure about the hoppy brown ale combo idea in general. Pass on this one.

Sound of the Sitar ~ Ravi Shankar 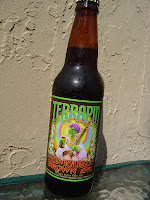 Hello Optical Illusion. Why are you leaning? I have no idea why that came like that, but it can't be anyone's fault but mine!
Posted by Beer Drinker Rob at 5:58 PM

shame, because the bottle is spectacular.

You think the bottle is spectacular because of my superb photographic skills. :)

You know what else? I started deciding which beers were gonna be in the July Top 5 and all are DIPA's. What has happened to me? I love them but all the other styles in July were pretty assy.

I guess I'm a hophead.

Now, see, Rob, Hop Karma is all UP MY ALLEY and then some. I really dug this beer and thought it to be quite yummers (to quote my 7YO nephew).

Uh oh, bunster. Flat brown ale with hops? I know you better than that! I like the brewery, but not this one? BTW, any idea why they changed the name of it?

(Athens, GA) – According to Dustin Watts, Terrapin Beer Co. VP Sales and Marketing, Terrapin India-style Brown Ale will soon get a name change to Terrapin Hop Karma Brown IPA. Watts says that there are two main reasons for the change:


“1 – We have found that most people that like IPA’s or any type of hoppy beers, don’t really like Brown Ales and are sometimes turned off by them. We have seen people shy away from this beer because of that reason. Once we get IPA drinkers to try this beer, they love it. They love the hop profile and the roasty backbone that it offers compared to most IPA’s. Most people understand what a Brown IPA is going to be as compared to India style Brown Ale.

2 – This is kind of the flip side. Most people that really love brown ales find this beer to be too hoppy. When we created this beer, we ultimately were shooting for an IPA with different type of malt profile.

In the end, we feel that Brown IPA describes the beer better than India style Brown Ale.”