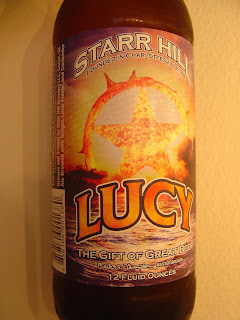 This afternoon I'm drinking Lucy brewed by Starr Hill Brewery in Crozet, Virginia. There is a place where the brewery was supposed to notch a "purchase before" month, but there was no notch. So I chipped out a wedge of September. Hey I wanted to make sure it was a few months fresh! The label calls this "The Gift of Great Beer" and I'm just noticing this is an "ale brewed with ginger, lime flavor and coriander".

So this is definitely a ginger beer! Holy cow, powerful ginger ale burning my nostrils, overpowering, with some other strange component. Flavors are like that too--ginger, grain, and lemon-lime--very powerful and not really complementing one another. Lightly bitter, spicy, earthy, dirty. The medium carbonation is the best part of this. Very weird flavors and on the disgusting terrible end of the beer spectrum. I did not like this at all, though I did finish it, I will admit. 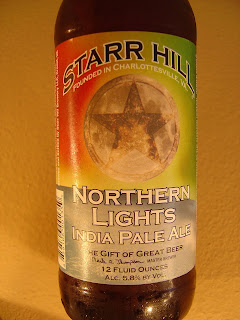 OK. Because that was an utterly horrible start to this afternoon, I'm going to review another beer from the same brewery: Northern Lights India Pale Ale. When I bought this beer, I didn't remember drinking it before, but sure enough, here is the review from around eight months ago. This label also says "The Gift of Great Beer", so at least I'm reassured knowing that's a brewery slogan and not one for Lucy. Purchase before notched April. Hmmm. No year, but let's assume it is 2010. Uh oh, Total Wine. I just bought this from you this month.

Citrus and fruity aroma. Malty, caramel start to this beer. Plenty of bread and toast flavors, too. But a hoppy bitter balance does step up and actually dominates that the rest of the way. Orange citrus and pine along with some lemon peel really thin out the initial malty flavors. The dry bitter flavors last a long time on your palate after the beer is gone. Very refreshing. I didn't notice the 5.8% alcohol at all. This was a nice beer. Starr Hill redeemed!

I guess you know which one of these two to choose. If not, go back and re-read more carefully. 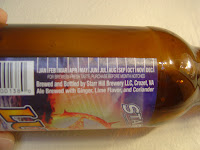 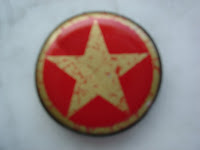