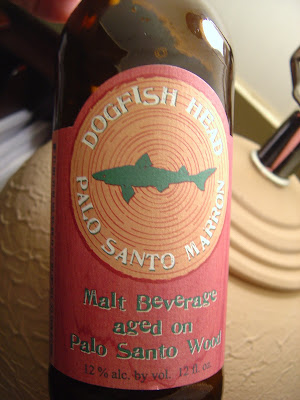 I got stuff to say, just no time to say it tonight (unless you want to hear some nonsense on Twitter later). Well, that's it, except for the promised daily review... Take a moment to comment--tell me how much you love or hate me, but be sure to say why. Tell me what beers I should be reviewing and where I went wrong with this or any other review you've read. Don't like my political or social or personal or whatever else commentary? Let me know, but you know, tough shit on that one!

Tonight I am drinking Palo Santo Marron brewed by Dogfish Head Craft Brewery in Milton, Delaware. This is a brown ale aged in barrels made from Paraguayan Palo Santo wood. DFH goes on to say that "[they] have wood"! Hmmm. Better be good! I've actually had this beer, reviewing it first back in July, 2009, but I though I'd have another try with it. Bottled on 11/11/09.

Vanilla, chocolate, toffee, booze--quite the aroma. The chocolate smells sweeter and richer as the beer warms up a bit. Flavors start out with tons of that exotic wood, along with lots of sugar and more than a hint of vanilla. Raisins and prunes along with molasses flavors yet not molasses thickness. The wood is prominent and a slightly bothersome aspect of the beer. I guess it's my own damn fault for expecting less of it. The 12% alcohol was warming and noticeable yet more of a catalyst to the sugar and raisin sweetness. Smooth, slick, creamy. On the barely sweet side with zero hop hints. The carbonation was low, a negative; body was medium. Good flavors, complex and for sure try it. Even with only 12 ounces, you may want to split this guy! (That would give you some wood!)

My masterpiece. Yes, of course I'm talking about my Pointer Finger, you idiot! 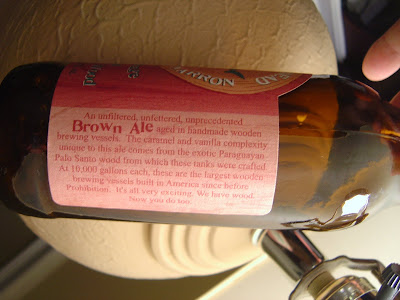 PSM is just one of the many amazing beers from Dogfish Head. I remember trying this for the first time and being 1)surprised at how complex the flavor was and 2)how quickly you can get buzzed off of this!

Thanks for sharing...it's been a while since I've had this but it's definitely one of my favorites.

Thanks for stopping by. For sure, a complex beer. I'm pretty sure that wood just isn't my deal, and I've said that a few times before. So that part is my fault.

And yeah, the alcohol totally sneaks up on you, even in the little bottle :)

I'm a huge fan of wood. Love this beer. Saw the vat they do this beer in on the DFH tour in Milton DE. They state if you shot the wood with a bullet it would bounce off. The wood is that hard.

Hey Ed. I'm sure that was a cool tour, but I'm betting it didn't end with that bullet demo! I like this beer but overall and in general prefer wood in my furniture.

I consulted my DFH guest post on your blog and I said pretty much the same thing: WOOD. But it's definitely good wood.

Who knew "good wood" would have so many applicable uses?

Mmmm.. this is one I haven't yet tried but I'd like to. Sounds like something to enjoy when the sweltering heat around here cools down just a tad, or at least in the accompaniment of an air conditioner.

Yeah, this is what you northerners might call a beer that goes with cooler seasons. Down here, I run my AC about 350 days a year.

The body wasn't super thick, but in no way would anyone mistake this for a "summer" beer.