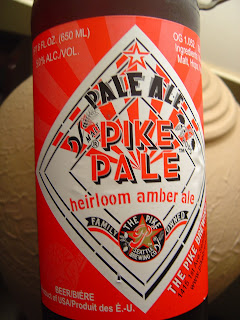 Let's get this weekend started! Actually, I already flew from Ft. Lauderdale to Philly today, so in essence, the party already has begun! I reviewed this beer a few weeks ago, a couple of days prior to our Pike Brewery Tasting event.

I'm drinking Pike Pale Heirloom Amber Ale brewed by Pike Brewing Company in Seattle, Washington. Nice red and white 22 ounce bottle presentation. The aroma is full of flowers along with caramel, just slightly hoppy. Wow, the flavors are much maltier than expected. There is an extremely distinct almond and mixed nut flavor as well. No Shit! Accompanying are sweet fruity apple and peach flavors. Bread, toast, tea, orange, lemon. Yes those are all in there. The flavors are aplenty, and despite that fact, the beer is still a little thin. Nice flavors except for a little offness left behind for an aftertaste. Mostly refreshing. Solid beer. 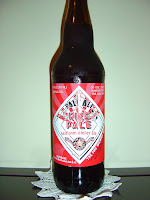 Up in Philly, eh? Why don't you extend your journey and come visit me in MA? It's only, what, 8-10 hours more of a drive?

More related to your review, I have a suggestion. Start counting the number of flavors you are picking up in your beer reviews. I've steadily watched the number go up. You might be interested in looking at the trend.

I've been seeing these beers from Pike in a few places in NJ. Didn't know anything about the brand until now! I've heard that they make an excellent stout as well. Methinks I'm going to try some shortly!

I'd love to get up to Mass but not this time. And I am actually in NJ right now, but back to FL tomorrow. Pike's are new to FL, too.

As for an increase in the flavors present, could be mood :)