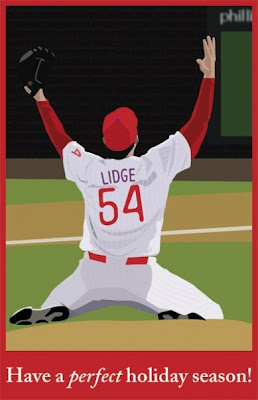 First, PhillyKelly, one of the most dedicated Philly sports fans I've met, designed the card to your left for Christmas 2008. I even asked permission to publish it!

My eight-year-old son went to the Phillies game this afternoon with my mom. Last game he went, Roy Halladay pitched a perfect game here against the Marlins. Mom texted me a few times with updates, which was funny because I had better seats than she did from my desk in Florida.

Well, going into the bottom of the ninth inning with a 5-2 lead, it looked like the Phils would be winning their 5th game in a row, continuing their triumphant #MarchToThePennant. (I started those Twitter hash tags a few days ago; so far, zero cooperation, but I don't let that discourage me. I haven't been like everyone else all my life (though I have been super cool) yet I get along just fine. Hey Philly (part-time) fans, how about a little support! Hmmm. Perhaps Twitter considers my hash tags spam. Whatever, I'm a bigger fan than the Phanatic!)

Back to the game. Shit, it was a save situation being only a three-run lead, which means #WildThing2010 (also an invention of mine, named for the erratic 1993 World Series loser Mitch Williams) Brad Lidge was on his way into the game. Lidge was a god two years ago when the Phils won the Series, but last year and this year have been ugly. Lidge comes in. I leave to save my heart. Ninety minutes later I confirm that I had probably averted a heart attack. Lidge gave up two runs and left the bases loaded to end with a 5-4 save! JHC!

Tonight I'm pairing my beer with my Brad Lidge love and drinking Rogue Brutal Bitter brewed by Oregon Brewing Company in Newport, Oregon. The label has a dude decked out in all purple; Brewmaster John Maier's signature is above the guy, but I'm not 100% sure this is his caricature. Rogue's website calls this a Brutal IPA and then refers to it as an Imperial Bitter, so you tell me the style, though those strict classifications hardly matter to me. (For the record, their website also says it's available on draft and in 22's but I am quite positive this is a 12 ouncer I am drinking).

I originally reviewed this beer a long time ago, March 2009, but decided to re-review it as it's a favorite of my pal, and ex-Rogue employee, Cooking Asshole! What? You never heard of a cooking asshole? Well, expand your horizons and go get a few laughs and some awesome cooking tips. When you've had enough of his wit, check out my guest post there: Big Ass Ham! Looking at that cast-iron pan pisses me off as I got a serious burn from it 2 nights ago. Fucker!

Big grapefruit and pine aroma. A few whiffs (Ryan Howard x at least 3 today) and you will get some sweetness. Massive bitter flavors up front, pine and a load of citrus. Some malty caramel does come in and ever so slightly eases those. A little spice and a tangy zip show up next. Repeat! Yes, that bitter really digs in sip after sip after sip. Bitter wins by a landslide, yet it comes with a mostly creamy texture. The alcohol and upper-level carbonation do make the bitter stand out a little more prominently and harshly by the end, but I get it. This is a solid beer that does what it is supposed to do, be brutally bitter. My favorite? Not a chance. Good beer? Absolutely give it a shot if you're prepared. 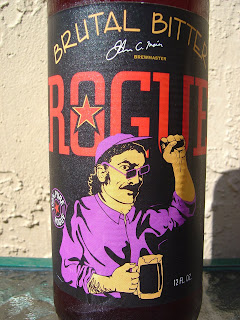 Spectacular picture, if I do say so my damn self. Though it certainly takes a back seat to an original Christmas card!
Posted by Beer Drinker Rob at 6:09 PM

I bet that bottle was old...otherwise you would have loved it!

Maybe, do they even put any dates on their beers? I didn't see one.