Tonight I'm drinking Stone 14th Anniversary Emperial IPA brewed by Stone Brewing Company in Escondido, California. The front label on big 22 has a gargoyle hanging out and raising a beer mug in front of a giant 14. To the side, there is a June 2010 stamp with a box below it which says to "CONSUME FRESH or age in the hull of a seafaring vessel for a year or more."

The back label has a long story, as usual. I took a picture but unless you're Superman, I am betting you can't read it (I haven't even looked at the picture yet, but I spent 30 minutes trying for something edible, you'll see). This story, however, is decidedly tame for a Stone bottle. Perhaps that is because it's signed by Head Brewer Mitch Steele and Brewmaster Steve Wagner (versus some marketing type). Mainly, the story just talks about exploring England and the roots of IPAs. Mitch and Steve "returned home inspired by the ghosts of Burton," deciding to brew this anniversary beer "using all British ingredients". They did put a disclaimer that the water they used was from the Colorado River, though.

Massive hoppy pine aroma. And holy shit, man! This beer starts out extremely bitter! Lots of pine mixed with a citrusy lemon and spicy black pepper concoction. Oily, too. There is definitely a malty sweetness in the background, but that only appears long enough to be crushed by the gargoyle! The 8.9% alcohol is mostly hidden but is felt with its warming presence. The mouthfeel is semi-rough, but the hoppy, bitter harshness is probably what you are after in a beer like this. Definitely welcome! The upper-level carbonation accentuates the spice and bitter. Personally, I prefer some fruit or sweet relief, like in Bell's Hopslam for example, but this was an excellent beer. You should for sure check this out!

Hot Sauce Stone Brewing Co. Arrogant Bastard Ale Burning Trinity of Bastard Hot Sauces Incredible Flavor Not For The Timid or Weak Gift Set. Habanero, Jalapeno, and Chipotle Sauces That Will Make You Wonder If You're Worthy of Such Flavor. Brought to You By RoJo's Gourmet Foods 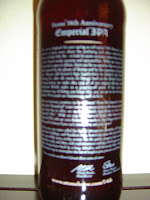 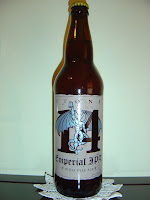 Here's the front and back. Good freaking luck!
Posted by Beer Drinker Rob at 5:59 PM

I was actually wondering if that beer is out yet today. After reading your review now, I will have to run out and grab on.

Yeah, Chalie. I bought it yesterday. Go and get it!

anything that involves crushing and gargoyles is A-OK in my book.

Yeah, if you look at the bottle, it's a BIG gargoyle. And he's bitter about something. Probably Mitch and Steve don't let the gargoyles drink on the job. Go figure!

We picked some up today; I'm thinking this will be my happy friday beer! :)

Good choice Vanessa. Let me know what you think.

That bottle looks badass. I think I'll be saving that one. Thanks for reminding me this came out. Gotta get to the store ASAP.