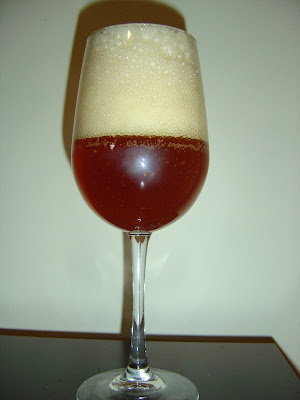 Over the past week or so, I've tasted and reviewed a handful of beers that a local friend of mine has home brewed. I'm about to publish three separate entries here, one after the other. I call them The Triumvirate! I'll be sure to link the others to each other so the less-computer-savvy amongst you can play along too! Be sure to tell Vanessa what you think (and when you'll be over for the party)! BTW, ignore phrases like "this afternoon". I already explained the time line to you!

The second will be Caught Off Guarde and the third will be Essence of Skank. Yes this is a little like Back to the Future!

Big cap pop and ginormous head. My photos are only 9 ouncers because, well, the head was already taking over the glass! Sharp lemon rind and citrus aroma, quite enticing! Lemon and citrus flavors dominate too. Dry and astringent, not that there's anything wrong with that. Earthy, yet slightly bland beyond the bitter. The 6.8% alcohol was a drying factor toward the end. Very refreshing, not overly bitter while this beer certainly leans that way. Fairly one-dimensional, though it is so totally awesome that one of my friends brewed this beer!!! 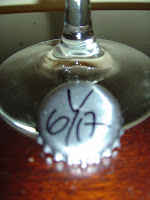 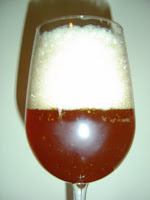 Oh No! Don't go over the edge! Very clever with the V marking for Vanessa's Vee.
Posted by Beer Drinker Rob at 9:28 PM

This beer initially started out as a Dale's Pale Ale clone, if that gives you a better idea of what I was going for. i think it ended up close, (albeit lacking a bit of malt backbone) but I did change out the dry hops to something more citrusy (Riwaka from New Zealand) which I like :)

Of these last three, this was my favorite!