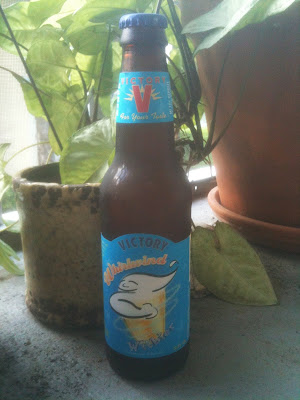 Tonight you get to read a guest post from yet another local Philly beer blogger--except we're all down here in S. Florida. And, get this, we're all under 40 and have real jobs too; this is no retirement group beer blogger community. What I'm getting at is that Chalie, who writes The Mug Of Saint Arnold Blog, is about to tell you about a beer...

With Daily Beer Review and I both being Philadelphia transplants to Florida, I felt I had to have a Pennsylvania brew to review for his blog. I went with a Victory Brewing selection, which is out of Downingtown, Pennsylvania.  I decided on their Whirlwind Witbier, their summer
seasonal.

The ale had an ABV of 5%, which leads to a very seasonable beer. On the label there was a “enjoy by” date of March 1, 2011. I served the beer from its 12oz bottle into an imperial pint glass (and don’t worry, no slice of
lemon).

Before I even poured the beer I noticed sediment suspended in the bottle, always a good sign. The beer had no head.  The body was slightly cloudy clarity and the color was a golden straw. The carbonation was light but steady.

I was impressed with the aroma, very full and appetizing.  I picked up notes of wheat, lemon, and spice.  The flavor paralleled the aroma, but I did not find it as strong as the aroma. I gathered notes of wheat, slight grainy, lemon, light pepper, yeast and cloves.

The body was very thin. The carbonation faded from tingly to more flat as I drank. The flavor duration was basic.

The beer reflected the style well.  It was light and refreshing, and would be a perfect summer beer to cool down with during those hot summer days. I would serve this beer with a nice summer salad or with some seafood.

Thanks for the review! I am planning a white ale tasting this weekend and saw this on the shelf, wasn't sure if I should get it.

Ultimately I passed because it seems pretty standard for the style, and I think I have the standard beers pretty well covered. At this point I'll only add something that expands the flavor profile of a white ale, or is an exemplary expression of the style. For example, just added Hitachino Nest White Ale... any super amazing whites that you would be shocked if we didn't add in?