Last Saturday (I've been busy, OK?) a handful of local beer lovers met up at the Abraxas Lounge in Miami Beach for Beer Tasting Extravaganza: Abraxas Lounge Edition. This was our third meeting in the series after the Total Wine and Coffee District Editions. I guess we had maybe 13 or 14 people from many diverse backgrounds, our common theme being an interest in promoting (and drinking) good beer locally. King Ed Roberts was at the helm once again. I guess I'll find out soon if I said anything stupid and if I'll be invited back next time. Not sure where it will be, but seriously Ed, if people would come, it could be at my house! (I have free Wi-Fi, and Mike, 595 and 75 are toll-free to my house, though the FL turnpike would be much faster!)

Dude, I was on time, even 15 minutes early, but the supposedly plentiful parking at 3pm on a Saturday was eliminated by many big Miami Beach PD signs telling me how they'd tow my vehicle because I'm not a resident. Is that parking garage paying off the meter maids? 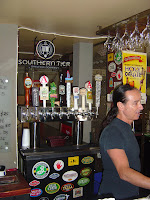 Abraxas does not look like a bar on the outside. In fact, it looks like just another home in its residential neighborhood location. Except for the Abraxas Lounge name on the wall, you'd never know. Now 3pm in Miami Beach is like 9am in the rest of the world, especially on the weekend. What I'm trying to say is that this place was not opened for real customers when we got there or for many hours to come. So a big thank you to Diego for opening his bar to us!

Phillies fans dominated the group, though there was one lost Braves fan (he was cool despite that flaw). Suit Guy didn't wear a suit this time, and there was even some beer and spirits mixing going on--a Beer Old Fashioned (not original post link) substituting The Bruery Hottenroth for champagne in the traditional recipe. And there was one other thing that really sticks out in my mind now--how awesome the home brewers represented! Great stuff, guys! 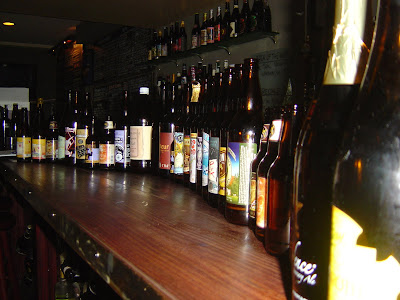 22 Beers? Yep. I was actually surprised it ended there, even writing "23" in my notes. Had nothing to do with Jordan either. But that was the perfect amount. Here's a short (LOL) recap to the best of my memory and from the notes. If you see any mistakes, be sure to nicely point them out.

1. Odonata Saison. Ed scored this bottle, yes bottle, in a recent trade. Apparently this beer is brewed by a tiny brewery in California, and they just recently started bottling this as their first one. I had already written a short review here when I got an email from Phil over at DosBeerigos.com reminding me that I was guest blogging with him this week. Here is the review of this beer.

2. Deschutes Hop In The Dark Cascadian Dark Ale. Wasn't sure what to expect here, though I was smart enough to think "hop" might have a double meaning. The aroma was interesting, with some malts, licorice and molasses. Flavors start out with chocolate but there is a pretty big bitter backbone in this guy, persistent but not quite an asshole. Smoke and wood flavors are in there too, with a dry finish. Pretty good beer. I'd like to try a whole bottle some day.

3. Port Brewing Wipe Out IPA. You know what's funny? A guy on Twitter told me just a few days ago that I had to try this beer. When I saw it come out, I was psyched. Very hoppy aroma. I wrote: citrus, light fruit & citrus. Hahaha. It was only beer #3. Flavors are quite bitter with aggressive carbonation. Lots of citrus, mainly lemon, with a sharp bite. Nice.

4. Home Brew Vanessa's El Jefé Twisted Hefeweizen. I overheard her saying this is some kind of Australian wheat-IPA hybrid. You'll probably recall that I did a review of this beer last month when Vanessa gave me a bottle. But this time, the beer had a cool label designed by Vanessa's husband. Oh, and I got some new goodie's from the them. Lemony citrus aroma. Sharp carbonation. Lemon and citrus flavors are dominant, while wheaty flavors and texture is also noticeable.

5. Rogue XS Imperial Younger's Special Bitter Ale. I recently told my Total Wine Assistant Manager that I will never purchase these Rogue 7 ounce bottles because they are too expensive. I mean $4.49 for 7 ounces? No fucking way! But in no way does that mean I am against the beer inside the bottle, and happily partook. The aroma is hoppy, but very weak. Wow, power bitter flavors start things off, but this beer is oh so creamy and smooth. Not an ounce of bite to be found. I was expecting some alcohol punch, but none was to be found--not sure what the content is on this guy. I guess a little malt does balance this out a little, but bitter is the word here. "Dangerously delicious" was overheard by me.

6. Odell Saboteur. (Non)-Suit Guy brought this one. The bottle calls this a Brett Barrel Brown Ale. I heard American Wild Ale. Faint aroma, perhaps just a little sour. Wow, rich caramel opening, nice texture. This really is a delicious brown ale with cinnamon and ginger. Nutty, malty. But then the kicker is that this is lightly sour, with that wild funk, not overly so though. And damn, this thing has 10% alcohol, nowhere to be found. This was one of my favorites of the afternoon.

7. Midnight Sun Arctic Rhino Coffee Porter. Very cool, eye-catching label. Someone also said that they just lost their head brewer who left to start his own brewery. This will be the second guest post with DosBeerigos.com. Here is the link to this review.

8. Fort Collins Barrel Licked Bock. This is a barrel-aged beer. Great flavors starting with caramel, dark fruit and some of that 10.2% alcohol, boozy warmth. Buttery smooth, nutty, smoky, creamy. I liked this one too.

9. Terrapin Georgia Theatre: The Iron Tankard Old Stock Ale. Only released in Athens and Atlanta, Georgia. This will be review #3 on DosBeerigos.com, which I'll link when it's posted. Update 8/30/2010: Here's the post over at DosBeerigos.

10. Home Brew Chalie Beach Bride Ale. Fellow Phillies fan Chalie recently got married, and I actually met his wife at the Garrett Oliver event. Yes, of course I made sure she is a Phillies fan, too! Anyway, Chalie brewed this beer to be served at his wedding, and appropriately named it Beach Bride Ale. Now I don't know about you, but I think that takes some big balls, I mean confidence! This was an international beer: Irish ale yeast is all I remember, but Chalie named at least two other countries. Caramel and malty to start, a little sugary. Yet there was still citrus and this was a bitter-leaning beer. Great flavors that lingered for a long time. I think I had at least thirds of this. I think I heard 9% alcohol in this one.

11. Rock Art The Vermonster. Ah, the Vermonster, subject of the battle between Rock Art and Monster Energy. We all know how that worked out, don't we? I heard someone comment that this is Ridge Runner's big brother, so I checked and that is another beer brewed by Rock Art. So this is a barleywine with 10% alcohol and 100 IBUs. Damn there is a big bitter bite to this one. But there is also a chocolate and caramel maltiness that stands apart from it. Two separate entities. A hint of lemony citrus is also present. Very smooth, but again, very bitter with a kick and a bite to last a while.

12. Home Brew Josh Russian Imperial Stout. I don't have a photo for this beer, unfortunately, so here's a piece of artwork hanging at Abraxas. I had never met Josh until this event, but found out he's an avid home brewer. Holy cow was this a dark beer! Rich milk chocolate aroma, delicious. Excellent flavors, rich chocolate, brown sugar, a hint of licorice. Definitely some alcohol warmth provided. Smooth and creamy, and wonderfully delicious. Damn, man. This was a professional beer!

13. Dogfish Head Liquor de Malt. Tony brought this one. The label on this "40" called it "The bottle-conditioned handmade malt liquor". Lemony citrus, plenty of hops. There is also a distinct yeast flavor to this which was a really nice aspect. Mike said he thought it tasted a little funky like a saison. For me, the name and bottle made me think back to the not-so-nice area in Yonkers, NY we affectionately called "40 Town".

14. Southern Tier Backburner Imperial Barley Wine. Bitter citrus aroma. Guess what? Bitter citrus flavors too, though this wasn't one dimensional. The bitter had a little more pine elements as well. This beer was also well  balanced with caramel and toffee flavors. Nice and smooth.

15. Founder's Red's Rye P.A. I brought this one. I already reviewed this one in depth, but how could I resist again? Rye, citrus and hoppy aroma. Nice bitterness to start, but fruity and sweet rye flavors balance that out really well. Good spicy black pepper kick. Quite delicious even as my palate started to give way.

16. Founders Dirty Bastard. The other I brought and had recently reviewed. Molasses, a little alcohol, good. Those make up the entirety of my notes!

17. The Bruery Tradewinds. Sweet with lots of yeast and spicy black pepper. Fruit and peaches. Dirty Texture. I have a bottle of this guy at home to eventually drink.

19. Alesmith Decadence Anniversary Ale. This is a Dunkel Weizenbock with 9% alcohol. Chocolate with light alcohol on the nose. Wow, the flavors do include the beautiful chocolate, but that's split 50-50 with awesome fruity banana flavors. There is a big story on the back of the bottle which I didn't have the chance to read. Delicious beer!

20. Boulevard Brewing The Sixth Glass Quadrupel Ale. Devil art on the front. Fruity apple accentuated by some fine carbonation. The 10.5% alcohol works well with the fruit which works well with the caramel. Smooth yet there is still a bite. Really good.

I love how the notes get shorter the more you drink. I expected the last one to be something like "sldcnweuksd8973#L{"

Did you taste in any particular order? Or at random. At our tastings we'd always go from lowest ABV to highest. But our organizer was an anal-retentive border line OCD. You know how it goes.

Yeah, it was a combination of less notes from the tasting and more interest in just finishing that monster post. Plus I'd had a few from the end.

There was some kind of order, but not by ABV. This time was a bit disorganized too. Not sure it's scientific, lighter before darker/bigger beers.

Hello hello! How was your weekend?

How often do you go to a tasting?

Yes, beer has a lot of cool art to go with it. Lots of dangerous ones were in the midst of those 22.

We have done three quarterly tastings with this group, and I have done a few others here and there that weren't as impressive or expansive.

Some of the other guys and gals that were with me though go almost weekly for a tasting with a handful of people. I can't make a lot of those personally because they are often too far and I have two children taking a lot of time (BTW that wasn't a complaint).