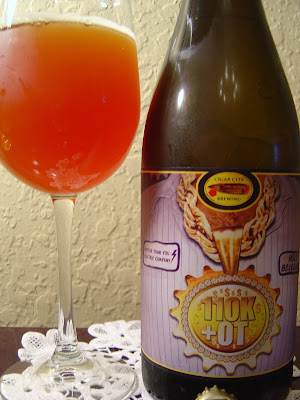 This afternoon I'm drinking 110K + OT Batch #3 2010 brewed by Cigar City Brewing in Tampa, Florida. This brewery has one of the best reputations and cult followings that I know about. They are only four hours up the road from me, yet they send almost nothing my way.

The other experiences I've had with their beers started when they sent their Warmer Winter Winter Warmer seasonal last year, which was an excellent beer. And more recently, they shipped Guava Grove. This one, however, almost slipped through my fingertips and would have had it not been for the awesome Ed Roberts delivering one bottle to me from the only case that came to South Florida. Really!

Besides those two, I did have the opportunity to try their Bolita Brown Double Nut Brown Ale from the “famous infected lot” at Beer Tasting Extravaganza: Total Wine Edition. And also their Big Sound Scotch Ale at Beer Tasting Extravaganza: Coffee District Edition. That wasn't really a fair review as my palate was burned out, but I do have a bottle of that Big Sound downstairs for another day.

The label on this wine-sized bottle depicts some kind of worker uniform. Instead of a company name or person's name, the patches say "BETTER THAN YOU ELECTRIC COMPANY" and "MALT BEVERAGE". Yes, "YOU" not "YOUR"! The back part of the label is very funny. I took a picture that is surprisingly blurry, yet readable. See Below, but basically they say this beer isn't for white collar sissy or namby-pamby Nancy boys, yet is for "the working man who has arrived". If you happen to be reading the label and "have ever attended college, you should probably just put this beer back on the shelf for a real man to buy". Damnit! I knew I shouldn't have gone to college!

The aroma is mostly sweet tropical fruit, pineapple with just a hint of pine cone. The flavors are extremely sweet at the beginning, very malty with wonderful fruit flavors. Nectar of the gods! Very syrupy, oily, you might need a fork. Pineapple, mango, guava, pear are all there. Brown sugar with a hint of spice say hello as well. The 10% alcohol in this guy is completely covered up, only providing a faint warmth. Not only is there no hop or bitter profile, this beer has wiped out my ability to even imagine one! Low carbonation is a factor too.

While the flavors are intriguing and intoxicating, I do miss some bitterness and balance in this beer. It's not really a Double IPA at all. You've probably heard me bitch about some extremely bitter beers of the same style not having enough of what this beer offers. Let me just throw this out there. How about Stone Brewing and Cigar City do some kind of collaboration beer. I mean if Stone's 14th Anniversary Emperial IPA and this beer were combined, it would dominate Earth! Same goes with Moylan's Hopsickle! A collaboration would be spectacular, but I guess you and I could create our own experiment, but it would be a little pricey if it didn't work out well. In the end, this beer was very good. It was, however, too sweet and lacked carbonation; that's my constructive critique of the day. You should try it though, if you can!

Cigar City Mafia: A Complete History of the Tampa Underworld 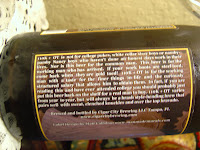 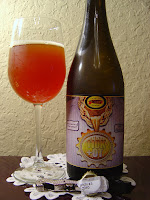 Click to read the label. Yes, a little blurry, but only Nancy boys complain!
Posted by Beer Drinker Rob at 4:53 PM

Okay sorry got a little riled up. I just couldn't take that name any longer.

Yeah, I totally can't even remember the name. Weird and too long.

Looks great, nice color, flavors are good too. It's just too sweet! There are about 4 others locally at least that agree with me, in case you usually check what I don't like to make your shopping list!

I really enjoyed the 110K(...) a nice change up from the regular double IPAs like Hopsickle that just slam you over the head with resiny hops!

I liked the fruity/floral hops :)

I don't know. While the flavors were terrific, this was over-the-top too sweet and was missing balance. I actually proposed that you mix this with Hopsickle for a double-wine bottle of balanced awesomeness!