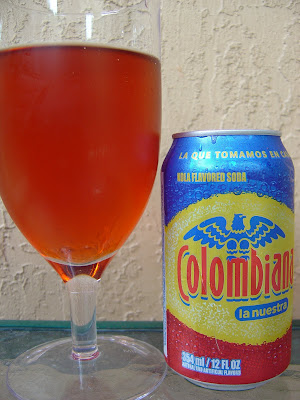 This afternoon I'm going to Beer Tasting Extravaganza: Abraxas Edition, but I wanted to leave you needier readers with something to do. Since we'll likely have 20 or more beers to sample, I decided on a different carbonated delicacy: Colombiana, a Kola Flavored Soda.

I am not a stranger to reviewing things other than beer. Surely you've seen my movie reviews of Toy Story 3 and Avatar. My water review of Publix Spring Water. My macro beer reviews of Bud Select 55 and Busch Light, and my bar reviews of Charlie's and The Boathouse. Is that enough?

I don't remember the first time I tried this soda, but it was certainly post April, 1997 when I was married. Mi esposa es Colombiana, and I'm sure she is the reason this ever crossed my lips.

I can remember drinking this dozens of times, but two times in Colombia are burned into my brain: both involve me basically being chased down in Bogota by the restaurant employees because I left with a bottle of Colombiana. Apparently they take "bottle deposit" very seriously down there in South America! Seriously, charge me extra because I want to take the soda with me. Jesus!

Well, I couldn't find the bottle version in Publix, only 12 ounce cans and 2L bottles. I asked the Publix teenager nearby and when she didn't know immediately if they carried bottles, I dropped the issue despite her willingness to ask someone else. The can says "la nuestra" and "LA QUE TOMAMOS EN CASA" so please let me know what that means (my wife is asleep).

Nice aroma, soft peaches, lightly fruity. Sweet flavors kick things off, sugary, but not ridiculous. Fruity orange and peach. Champagne-ish. Refreshing, flavorful, and of course the carbonation in soda is very important! Check it out! Nutritional info is on the can. 160 calories is all I remember now. 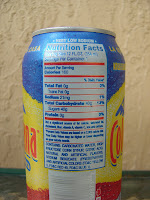 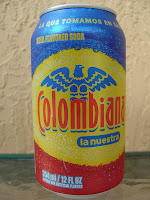 I remember in Mexico cokes were always better than they are here. I think they still put cocaine in them.

la neustra = ours
la que tomamos en casa = take that in the house.

and, just for future reference:
la que tomamos en culo = take that in the ass.

"La que tomamos en casa" means "the one we drink at home." The verb tomar literally means "to take" but is also often used as "to drink" in place of the verb "beber."

Thanks a lot. My wife is Colombian. I'm pretty sure "tomar" is the verb of choice for drinking around here, though I could be wrong. You like Colombiana? It's good. And they mix it with beer too, making that crappy Colombian beer better.