Everyone repeat after me... Welcome Back Beer Pancakes... You first met him back in February when he reviewed Founder's Breakfast Stout. Now he's back to tell you about another beer that will likely never pass by my lips. I almost said "Thanks BP" but caught myself just in time; we all know that is basically the equivalent of cursing these days.

As a grad student, I am kind of in this strange intermediate world of being a student and being a real person. For example, I can be hungover on a Wednesday, not show up to work until 2 in the afternoon, and no one really cares or notices. On the other hand, I can get a phone call or email at 8 am on a Saturday and get asked why I am not in the lab. A cell phone that can check email without me leaving my bed is one of the best survival tools I have. 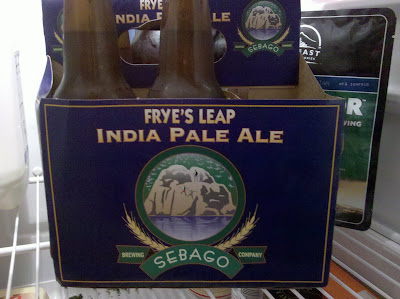 One aspect of grad school I really enjoy is that if you do a favor for someone, they generally pay you back with beer. You help someone finish an experiment before a dead line, they get you a beer or two at the bar. Take care of their cats for a week, they bring you some beer from their travels. It’s a nice system. It is especially nice when they bring back beer from a brewery you have never heard of. Recently, my friends went on vacation in Maine, and for taking care of the cats, they gave me a 6-pack of Frye’s Leap IPA from Sebago Brewing in Gorham, ME.

As soon as I opened this beer, I could smell it. A lot of citrus up front and also some candy-like/spicy aroma that I am having trouble coming up with a good descriptor for. In general, it smelled a lot like hop pellets. The color was yellow orange, a good color for a pale ale. The carbonation gave the beer a little haze and a head with nice tight bubbles. When the carbonation settled down, it was nice and clear. The taste was not nearly as interesting as the smell, but still good. Basically it is a nice kick in the mouth with bitterness. A couple other flavors floated in and out, but similar to the aroma, not too distinct. The head was nice and creamy and the beer had nice body to it with the bitterness giving a little weight as well. Overall a pretty drinkable beer until you get to the bitterness, then it is a matter of preference. For me, and most hop lovers, the bitterness adds to the drinking pleasure. For those averse to bitterness, it may be a deal breaker.
Posted by Beer Drinker Rob at 5:36 PM

Me = averse to bitterness

This beer = not for my palate, it sounds like

But still, thanks for the review! I will tell my co-author at FIWK, Aaron, to come check out this review because he's the opposite of me when it comes to IPAs and bitterness.