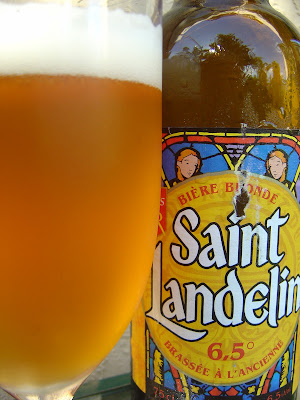 Tonight I'm drinking Saint Landelin Bière Blonde, a French beer brewed by Les Brasseurs de Gayant BP 20089 -59502 Douai Cedex France. If you speak French, that's your site. This wine-sized bottle was brought home by my friend via a trip to Barcelona. This beer has seen the cities: Paris, Barcelona, New York, Miami. Must be nice! The label with most of the info on it is translated into up to 5 languages, not all of them in this alphabet. Best before end: 28.08.11. The front label appears to depict some medal over top of a stained glass window and says "BRASSEE A L'ANCIENNE," of course with perfect accents.

Nice pure white head. Fruity aroma, peaches and pears, with a large grain presence. Flavors also start out very grainy. The pear and apple fruity flavors are much more subtle, but continuously present. There is also just enough spice to make this interesting. The flavors start out a bit sweet but some hops do come in and balance this nicely. Well carbonated, a very nice feature. This beer is very plain, but the flavors are quite nice and pleasant. By the end of giant wine bottle, the 6.5% alcohol was a little noticeable and playing with those initial fruits a bit. Perhaps this could be an introductory beer to some French winos, I mean wine drinkers. Booooo, I know! I wouldn't have them ship this beer to you, but it was good.

My friend also did a side trip to Amsterdam and hit the Heineken factory while there. He has promised a few pictures and a brewery-promoted beer drinking lesson for women. Oh, and he gave me this "Foam Skimmer Green" as a souvenir of his visit--Heineken managed to package it like a sterile green rectal thermometer with their logo on it. I took a picture, but will spare you. Thanks a lot, traveling beer guy! 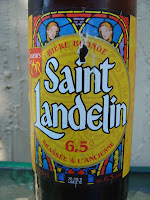 I guess this is the dude this brewery is named for.
Posted by Beer Drinker Rob at 5:59 PM