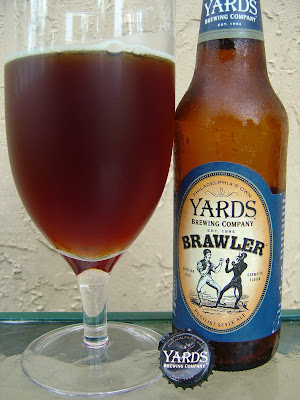 Last weekend I went to central PA for my brother's wedding. You might be surprised how much I learned in small-town USA. First, I learned that my sister-in-law and her older sister both purchased their boobs. How did I learn that, you ask? They both told me, independently, like they were talking about going grocery shopping. Go figure!

Next, I learned that Civil War reenactments are not just something that came from the minds of the South Park writers. People actually do that! I saw pictures, including the local congressman. Finally, I learned that there is a Cornell that no one wants to get in to. Take that, Andy Bernard! Coincidentally, I just saw Andy in The Hangover on the same trip last weekend. Good times.

This is going to make you groan, but since I just did some sparring with my newly minted in-laws, I decided to drink Brawler Pugilist Style Ale brewed by Yards Brewing Company in The City of Brotherly Love (again, my brother just got married). The label says "Superior Taste" and "Champion Flavor" while depicting a guy fist fighting some kind of devil cat. You also learn that this is a session ale, "great for when you want to go a few rounds". Now you understand the pugilist part, right?

Sweet, malty caramel aroma with a hint of tea and nuttiness. Rich caramel flavors to start, very malty. Sugar and tea and bread are also pretty dominant. The body on this beer is nice and thick, while the carbonation is lacking a bit, kind of flat. This is a fairly simple beer, but the flavors were very enjoyable. I would drink more of these given the opportunity. Check it out! 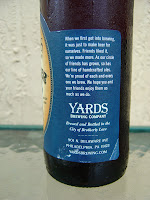 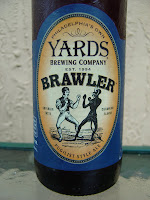