Guess What? I finally figured it all out. Yep, I remember precisely when I realized that beer doesn't need to taste like shit! It was a day back in the Spring of 1993 (could have been 1994, but I don't care to do the research). I was sitting in the Cornell Hotel Management School in my wine tasting class with a few hundred other "students". That week was Beer Tasting Week, with THE Michael Jackson as our guest speaker. I guarantee that no one there knew who the hell this bearded dude was, especially me. Everyone moaned at his little children perv opening joke, too. And remember, kids, no internet back then.

I don't remember how many beers we tried, but there was definitely a Cherry Lambic that I remember. Oh, and a Celis White. Along with that beer came the story of a Belgian brewmaster opening shop in Austin, Texas. Wow, I can still remember being in awe of how great that beer tasted. Shocking! I probably still had some Piels that night, but I am now sure that was the defining moment in my love of great beers!

I remember thinking about that beer a year or more ago when I was beginning this blog, discovering that the brewery no longer exists. And a tear came to my eye. Pfft! Really, Miller bought out the brewery back in the late 1990's (I think), and those bastards closed it not too long after in 2001, citing poor profits. But the awesome Michigan Brewing Company in Webberville, Michigan bought the Celis name a few years later and started making the beer again.

How does it compare to the original? I really don't remember the 1993 flavors or have any idea about the current recipe. But I am delighted that I found this beer on my recent Pennsylvania trip. The label depicts an old brewery scene. Apparently I missed the 08/21/10 date stamped on the label, too, but I actually bought it after that date too! D's, you're on notice! Here we go!

Yeasty aroma, a little citrus, and a dose of bananas. Banana flavors plus some nice and spicy coriander and cloves start things off. There is a definite yeast flavor and texture to this beer, with even a lightly sour and funkiness to it. Good carbonation accentuates a hoppy little nip making for a refreshing beer. Flavorful, really nice. Try it if you can. 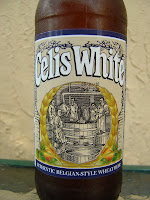 Its always nice to revisit the stuff that you started your beer drinking career with.. Fortunately for me, that time was not so long ago... That being said, I did not get to take a class with The Beer Hunter.

You know, BeerPancakes, that was a great experience. But only in retrospect. I don't think MJ was even famous then. I was happier when Kevin Nealon sold out (for free) the big auditorium (don't remember the name-Psych 101).

I'd have preferred where you are, a little younger, with the movement more advanced. Beer in Ithaca sucked when I was there!

Wait... did you go to the Cornell Hotel Management School? Or did you just happen to be drinking a beer there?

I went to the College of Arts and Sciences and have a degree in Chemistry. But I was free to take classes at any of the Colleges, including Hotel Management.

This class was a must take!