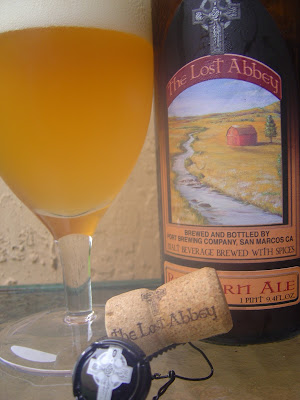 Real quick with the bullshit because I got a big beer to review! Plus I'm not much for chit-chat anyway. Tropical Storm Nicole shifted paths slightly during the day so we're not getting much wind from that bitch. However, she has been dumping ridonculous amounts of rain for two days straight now. Next, you all remember my Punkin Ale print story from a few days ago? Well Big Mama and The Goddess of Gear made my story even better today. But you'll need to hold tight for that one. Soon, I promise. Finally, if you didn't hear, the Phillies clinched the NL East division title. I didn't say anything a few days ago mainly because it's no big deal. World Series or bust!


Tonight I am drinking The Lost Abbey Red Barn Ale brewed by Port Brewing Company (aka The Lost Abbey) in San Marcos, California. This beer came back from my friend's business trip to Denver a few weeks back. Thanks, traveler dude! And another score, as this brewery has quite an awesome reputation (for their beer as well as for not being available in Florida).

Now I didn't even know the style of the beer until I opened it up, but I guess had I been thinking, the "barn" part of the name might have given it away. This is a Saison with that funky yeast strain and "farmhouse" component to it. This guy came in a wine-sized bottle so I gotta stop typing and get to the drinking. Hold on! A quaint picture on the label depicts a small barn in a field by a stream. The story on the back goes on to give you the barn's perspective on life. This beer is brewed in honor of summer which happens to be their favorite season.

Big head, enough said. Fruity apple aroma, a little sour and a lot funky, which is when I discovered the style. There is a very large yeast flavor right out of the gate. Yeast and fruity bits along with a distinct bread dough. Lemon, sour apple, pear. Also present are a large dose of coriander and a smaller amount of pepper. Finally the star shows up. Yep, funky big wet dog! All of the flavors are working together in perfect harmony. What a nice creamy texture this beer has as well. Wrapping things up, the light initial bitterness followed by sour fruit and a big dose of wet basement, on any other day you might think you were in the County Jail. But not today, because you're drinking this terrific beer!

Smell of Wet Dogs After a Summertime Rain ~ Aaron Misenheimer 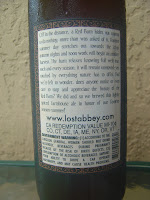 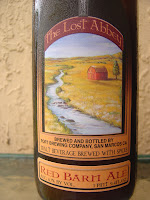 Not spectacular, these pics, but I was fighting darkness and a tropical storm and 120% humidity. Don't like it? I have the bottle here still for you to photograph!
Posted by Beer Drinker Rob at 5:57 PM