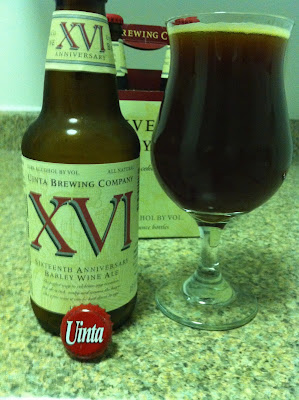 Today I have a guest poster: Twitter friend Helder from Black Eye Beer.  We don't actually know each other very well, but chat back and forth about beers fairly regularly.

However, visiting his company website again today, I learned quite a bit more. Black Eye Beer is based in Boston and brews "Aggressive, Small Batch Beers". The company was built on Helder's home brewing experience. Personally, I can't wait to taste them!

The beer being reviewed today is from Uinta Brewing in Salt Lake City, Utah. I only recognize the brewery name and have never had any of their beers. Here you go!

First of all, let it be known- I tend to prefer my barleywines on the hoppier side of the scale.  In popping the top and pouring out this Uinta XVI Anniversary it quickly became obvious I was in for a different experience. The first thing that strikes you when you smell this is the sweetness. The nose is full of caramel/toffee/molasses notes. Also pretty obvious are the aromas that will often result from a 10.4% ABV bad boy- the alcohol is there for sure. It's a good looking beer, a thin tan head that recedes into an ever present ring, leaving very little lacing (in my case at least).

The taste of this barleywine is actually pretty balanced. Again the caramel malt takes over with just a touch of hops bitterness to round out the palette. The alcohol burn is there for sure- this is no doubt a sipper. Hey- it's a barleywine, enjoy it, don't chug like a douche. As a matter of fact, sipping will pay dividends as I noticed the character of this beer change as it warmed. The flavor became "rounder", easing onto your tongue in a more mellow way with each passing sip..God I love craft beer. In terms of mouthfeel, we're not talking anything too thick here, despite the malt presence.  The carbonation is low, but I wouldn't consider this to be a heavy beer-it's just right. Pick this one up..they come in 4's.. maybe even cellar one and see how it ages.

I never heard of 'aging beer'. Again it makes sense that a flavor develops over time. Interesting! Does the color change as well if you cellar one?

Yeah, people age beers too. I was news to me until just a few years ago. The high-alcohol ones I guess age particularly well and that edge is taken off.

So what's the ideal temperature you'd want to cellar a beer at? You don't refrigerate them do you?

I am certainly not an expert and don't even follow this myself for the few I have sitting around. But some of the bottles (and therefore the brewers) suggest 50-55 degrees.