So you heard me mention yesterday something about a Phillies Poem, right? Today it arrived. Yep, Coach Barney sent over "An Ode to Doc" this morning. Even Microsoft is seemingly rooting for the Phillies and Roy Halladay as they delivered this poem in Word with their .doc extension. Here you go, and thank you, Coach! Tonight is Game Two. Go Phillies!


An Ode to Doc
By Bobby Hughes

Ten short months ago Doc rode into town.
Reuben’s white whale- A Phillies’ ace at last!
Never had a hurler with such renown
Requested to pitch for us in the past.

Roy’s pinpoint control led to perfection
In May. Cuttered! So cuttered! Faces broke
Every night. Our hearts won, our affection
His- how much more joy could he evoke?

On the mound for his October debut
We knew he would win, but saw so much more.
Roy no hit the Reds and his legend grew!
This beast of a man that we all adore

Still has chapters to write in this Fall’s tale,
Leading the Phils to baseball’s holy grail.


Damn straight, Bobby! For that, I'm going to crack open a six pack of Back in Black, a Black IPA brewed by 21st Amendment Brewery in Cold Spring, Minnesota. Packaging is cool. The six pack of cans comes in its own box, none of that plastic ring nonsense. The scene on the box and also the cans depicts the "One if by land; Two if by sea" ride of Paul Revere fame. This beer is described as an American IPA brewed with rich dark malts. (Fuck! I just broke my glass. Stupid chair!) These came back from my friend's Atlanta trip a month or so ago. Thanks again. 6.8% alcohol. 65 IBUs.

Roasted chocolate aroma, with a little citrus way underneath it. The flavors start out rich and malty as well, but a large lemon citrus flavor is equally present. A little smoky. Lightly burnt coffee. More lemon. A little nip from the hops and yep, light bitter is prevailing. This beer is smooth with good texture, tasty flavors, perfect carbonation and great balance. I like it though I don't feel any IPA in this guy at all. That's not really a bad thing as I don't want anyone messing with one of my favorite styles anyway. I believe Black IPAs are also called Cascadian Dark Ales, and that's what I am going to call them from now on, too. Lemon left behind on the palate. Very interesting all around. Try it when you can. 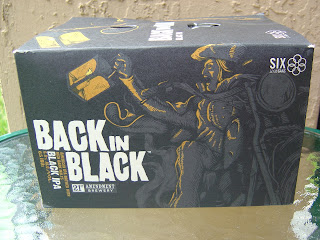 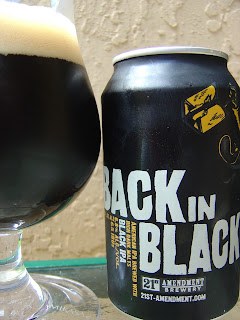 Yeah, Mike. I have 4 more. You can have one no problem. You had Founders Devil Dancer? Have one more of those too.

Had this stuff for the first time out in Reno at CANFEST. Good beer? Yes. Very well balanced.

That said, I really don't get the new fascination with black IPAs.

Glad you had a great time out at CANFEST. Yeah, this beer was good, but that roasty, burnt flavor is not always that attractive for me personally.

You said it. What is up with the Black IPA rage?