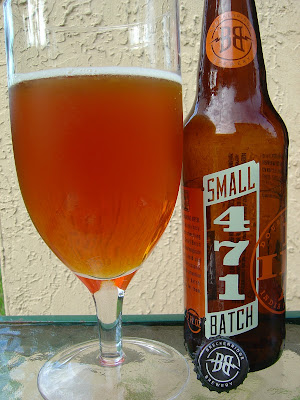 Tonight I'm drinking Breckenridge 471 Small Batch IPA brewed by Breckenridge Brewery in Denver, Colorado. This is a Double IPA that is not a mainline beer; however it got enough attention to be bottled. So the bottle tells the story. Why 471 you ask? I think it's not coincidental that they are located on 471 Kalamath Street. How about you?

Orange citrus and pine aroma, with sweet malt in the background. Very nice. The flavors start out quite sweet with plenty of orange and pineapple. Those flavors stick around only for a short moment at which point a flood of pine tree and black pepper spiciness rushes in. The beer gets progressively more bitter until the end. The 9.2% alcohol starts to show its teeth right at the end with a little burn and drying power. Dry and quite bitter finish. Repeat a bunch of times until all 12 ounces are gone and you have a big smiley on your face. Not particularly balanced as sweet and bitter both have their own days in the sun, but I think both aspects were delicious and played off each other nicely. Constructive criticism is that the alcohol could have been masked a little more, but despite that, I really liked this beer. Solid! Check it out! 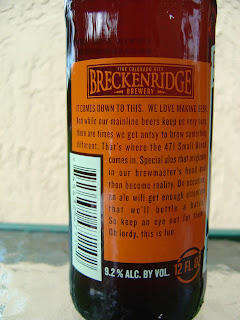 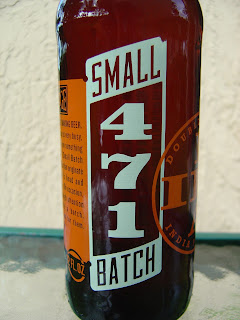 I wish I were you.

You should come over some night and have a few, bring the family and we'll make it a night.

Actually, I'm expecting the Phillies to make it far enough for me to consider having a small party. Fingers are crossed.

Yay, a beer I've actually had! I liked that one a lot, I think. It's been a while.

Hey Marie, or Hola as they say down here. Breckenridge is the newest brewery to hit the shelves down in SE Florida. They just started arriving here a month or so ago.

This was a good one.

Brent brought some of this back from Houston at the beginning of the year, it's super-solid :) Very glad to see it in FL!

This is one of my favorites! My only problem is a 6 pack is about $15 here. Glad you liked it too!

Hey Vanessa. Yeah, glad they made it down here too. So far so good.