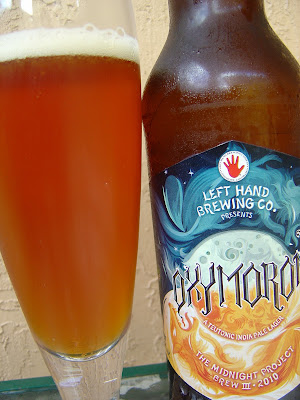 This afternoon I'm doing some mental preparation for the game tonight. Yes, the Phillies. Watching Penn State play an extremely painful game (for both sets of fans) against Minnesota. Ugly all-around, with the exception that PSU is somehow winning.

Getting started with Oxymoron, a "teutonic india pale lager" brewed by Left Hand Brewing Company in Longmont, Colorado. This is the third beer in The Midnight Project (Brew IIII - 2010), which is a collaboration between Left Hand and Terrapin Beer Company. I took a picture of the little story that goes into more details for you to read; I haven't had either of the other two previous ones, don't even know their names. Interesting other-worldly planet ghostly animal label art by Charles Bloom with design by Moxie Sozo. Bottled On: Smudge--90% sure it says 08 18 10. They need a new system for that identification as it's ALWAYS smudged and mostly illegible.

Sweet corn grain, earthy aroma with hops behind that. Sweet caramel and more grain flavors start things off, with some bitter lemony citrus right there at the same time. These two components are not working well together at all. (Apparently, so it seems, they named the beer after brewing and tasting it.) Very strange so far. Next flavors included some skunky offness combined with a hit of pure alcohol and a touch of spice. Big carbonation accentuates the worst this beer has to offer. Astringent bitter finish.

Now I had already contemplated dumping this about 2 ounces into big 22 but decided to gut it out and give Oxymoron every opportunity to grow on me. Warmth showed miniscule (Blogger says that's misspelled but I don't give a shit) flavor improvements. Some of the grainy skunk went away, but not enough to matter. I'm actually considering asking Total Wine for a refund--this beer sucked that much! I usually love these two breweries, but wouldn't, if I were you. 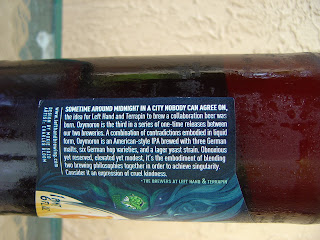 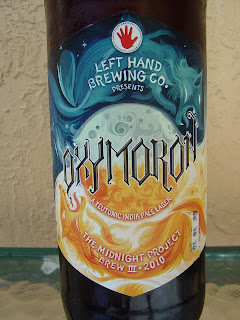