You've met my coworker before as "Beer Getting Girl". Remember back in January when she was the last person in the country to make a stop at a Total Wine store? Ah, I thought that would jog your memory. Well, yesterday she started telling me about her weekend and this beer she drank. She decided she'd do a review. And she has also now morphed into CoWorker V (not X or Y). She took no pictures, so if you have a better one than this crappy thing from the brewery's website, please let me know.


Son Of A Peach

This Sunday, instead of going to church like I do most Sundays, I found myself stumbling from booth to booth at a wine and art festival halfway between Asheville, NC and Greenville, SC.

After several hours of tasting my way through the NC and SC wine scene, I arrived at a booth for RJ Rockers. “RJ Rockers… that sounds really familiar,” I said to myself. Then it hit me. I have bought a few bottles from that brewery for Beer Drinker just this year!

Why there was a brewery at a wine festival, I have NO idea, and my husband had already warned me not to talk so much because we were with his coworkers and I tend to get chatty after sampling 37 different wines, so I decided not to ask questions.

My choices were Son of a Peach or their new Buckwheat After Dark (Bad) Ale. If I had known the Buckwheat was a brand new brew, I probably would have paid it more attention, but I’m a fruit drink sort of gal, and went straight for the Peach.

I must admit, I’m not much of a beer drinker, but this Son of a Peach is a drink I could get behind! It is a wheat ale made with South Carolina peaches. It is only brewed in the spring and summer when local peaches are in their prime.

It was so refreshing, but I wouldn’t describe it as light. It was definitely a wheat ale. I expected it to be sweet like a dessert beer, but the sweetness I was expecting was nowhere to be found, and I was ok with that! The sweet peach aroma was heavenly, and balanced out the slight bitterness for a really nice combination. There was a bit of a hoppy aftertaste, but it was pleasant, not overpowering.

I would buy this beer for myself, and that’s saying something!

Update, a little later same evening: A guy from RJ Rockers sent this photo from a prior event to CoWorker V, but said he didn't have any from last Sunday. 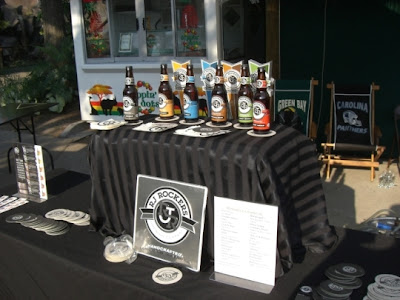